WORLDS DIVIDED THEM. DESTINY BROUGHT THEM TOGETHER. ONLY LOVE WILL SAVE THEM.

Venus isn’t from Earth, she’s from Kelari. On her planet she’s next in line to rule, but there are those who will go to great lengths to make sure that doesn’t happen. Including frame her as a traitor.

Accused and sentenced, the gods of her planet exile her to Earth. They’ve given her one week to help a human find his true love. If she doesn’t succeed, she’ll die, but if she does she might lose her heart.

When she reached the water’s edge, she fell to her knees, eager to quench her thirst. Before the water touched her lips, a warning of danger stopped her. The hairs on the back of her neck rose. She glanced around.

She heard him before she saw him, his words sailing over the rapidly moving stream.

Startled, she glared, trying to make out his form. When her eyes finally found him, she stared, open-mouthed. Awed. Amazed.

He’s . . . handsome I guess. Then quickly reprimanded herself for such triviality.

Setting her mouth in a firm line, she asked, “Why not? I’m thirsty.” The words came out whinier than she’d intended. Years of combat training taught her to be on alert. But she hadn’t been prepared to run into a human so suddenly. Questions about the dark-haired boy bombarded her.

Her dehydration encouraged her to set them aside. She needed a drink, now or she worried she’d faint. Still keeping her eyes fixed on the boy, she bent at the waist, ready to plunge her mouth into the water.

“Come here, you can have some of mine.” His voice reminded Venus of soft velvet, though the words came out slurred. One leg shook, like he’d been filled with writhing ants, the back of his thigh pounded against the thick, rotted tree stump he’d folded himself on.

Everything about him screamed dark and handsome, except his skin, which resembled hers. He appeared to be brooding, eyebrows scrunched, faraway look in his eyes. Plus, he reeked of angry attitude.

From where Venus stood, his eyes looked black with dark lashes and eyebrows. There was a scar, which ran straight as an arrow, from the tip of his nose to his left cheekbone. His clothes were all dark. A long-sleeved black shirt over a black t-shirt and dark blue jeans, at least that’s what she thought his trousers were called, and black lace up boots. Had a storm cloud come along, he probably would’ve been invisible to her eyes.

“What’s wrong with this water?” she yelled, though she’d already stood and started across.

“It isn’t clean. You could get sick.” His mouthed twitched, like he barely contained a smirk or a snide comment. “Nice boots, but where are your clothes? Not that I mind.” He leaned forward, resting his forearms and elbows on his thighs and watched her cross.

The icy water splashed against her legs. It reminded her that all she wore were her boots and unisa. She’d spent time with Zaren in nothing more . . . in fact less, because she didn’t like to wear shoes, and never experienced a need to cover up. Looking down, she realized how much of her body was exposed. A blush tried to creep across her cheeks, but she ground her teeth, shaking it off.

“Uh, I lost them. Are you sure you don’t mind if I have a drink?” She inclined her head toward the thermos next to him. Her throat became more parched, if that were possible. She resisted running over, chugging it.

“No, go ahead.” He picked up the red thermos, unscrewed the lid and held it out.

Venus rushed over. After a swallow, she realized it wasn’t water. The liquid burned all the way down. She gasped, dropping the thermos. Grabbing her throat, she watched the honey brown liquid spill onto the rocky dirt.

Her throat constricted, but she choked out, “That isn’t water.”
He chuckled, wicked. “It’ll warm you up. Soothe your insides.”

Gagging, she fell to her knees at the water’s edge, stuck her mouth in the stream and drank. With relief, her thirst started to subside. After several mouthfuls, she stood and turned. Water had soaked the ends of her waist-length hair as had some mud. When the frosty ends touched her skin, she jumped and swore. He snorted at her noticeable discomfort. His face revealed a look she’d seen before, on male kelarians, especially after they’d had too much of what humans called alcohol.

“You can take your foul thoughts and go straight to your—”

“Hey, I’m trying to be chivalrous.” And before Venus realized the tainted plan he’d devised, he grabbed her by the shoulders and kissed her.

Until that moment, Venus hadn’t considered what her first kiss would feel like, but she knew this wasn’t right. Hard, full of anger. He pressed her lips open and she tasted the alcohol on his tongue, sickly sweet. His arms locked around her, crushing her body to his. She sensed a pleading in his embrace, a longing for an unfulfilled wish.

The human pushed Venus away, wiping his mouth.

“Come on, Venus,” Zaren grabbed her hand, pulling her from the foul boy.

She watched stunned, as the brooding human smiled, but it didn’t reach his eyes.

“Venus. Funny,” he said, his words full of venom, like her name had been laced with poison.

She pulled her hand from Zaren’s. Anger ripped through her along with a gripping sadness at the loss of her family and her irrihunter. That this boy had the audacity to find humor in her name, at her, Princess Venus, daughter of King and Queen Carania, rulers of Alayeah, the biggest kingdoms in all of Kelari, was unacceptable. How dare he? She wouldn’t have it. Her heart ached and her body hurt, but she ignored the pain. Head held high, she marched over and slapped his face. Hard.

“Don’t ever touch me again.” She gave him a defiant stare, daring him to try.

“Well, Venus, you’ve no reason to worry. Your name alone will keep me as far from you as possible. The Goddess of Love, how ironic.” He chuckled without humor and turned. Head in his hands he sunk onto the dead stump.

At the sight of him in such a condition, her anger abated, replaced by an unbidden grief. She pushed the bizarre feelings away with vehemence. Surprised she felt anything but furious at him, she made her way to Zaren.

When they were a small distance away, Venus said, “What an annoying human. If I never see him again, it’ll be too soon.”

Zaren cleared his throat and walked ahead.

“What?” Venus asked, catching up and grabbing his arm.

“That annoying human is Michael, the boy you’re required to help.” He took a step forward, but stopped. “Humans and love,” he grumbled and stomped ahead.

Venus stopped and looked back, profoundly shocked. “But—” 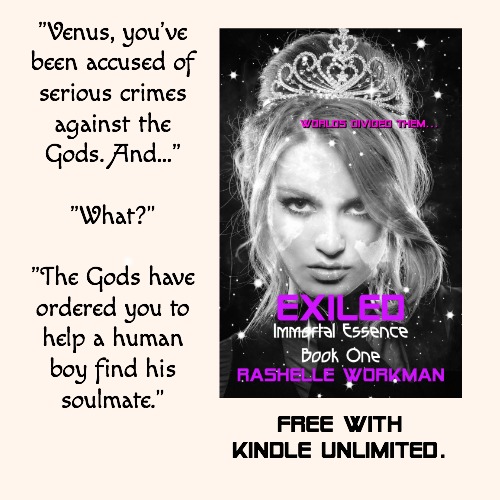 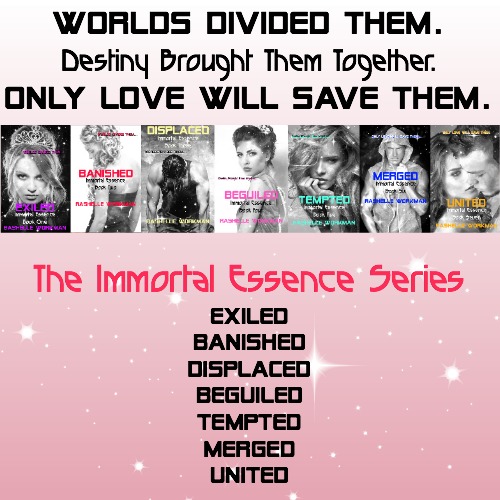 RaShelle Workman is an international bestselling author. Several of her books have been translated into Turkish and her BLOOD AND SNOW series has sold over a million copies worldwide. When she isn’t writing, she enjoys baking, creating new taco recipes, and watching Supernatural.

RaShelle lives in Utah with her husband, three children and their three dogs. Find her online by visiting her website at: www.rashelleworkman.com. And sign up for RaShelle’s newsletter to receive free books and get information on book release dates: http://eepurl.com/sd_xP.