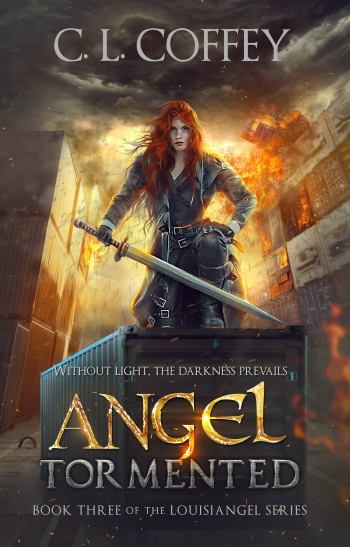 Find out exactly what the rules are, and what can be broken;

Find out what is going on with Joshua and me;

Get a whole lot better at using a sword;

Work out where Lucifer is and defeat him…

Ever since a photograph of an angel made the news, people have been camping outside the churches of the city, waiting for their own miracles. To keep a low profile, Michael has kept Angel under house arrest. With the absence of the cherubim, and the remaining angels too busy (or lazy) to help, Angel has been too distracted to worry about the fact there are two Princes of Darkness in New Orleans. That is, until Ty, the Nephilim who has yet to earn her trust provides her with information that could lead to the end of Asmodeus. 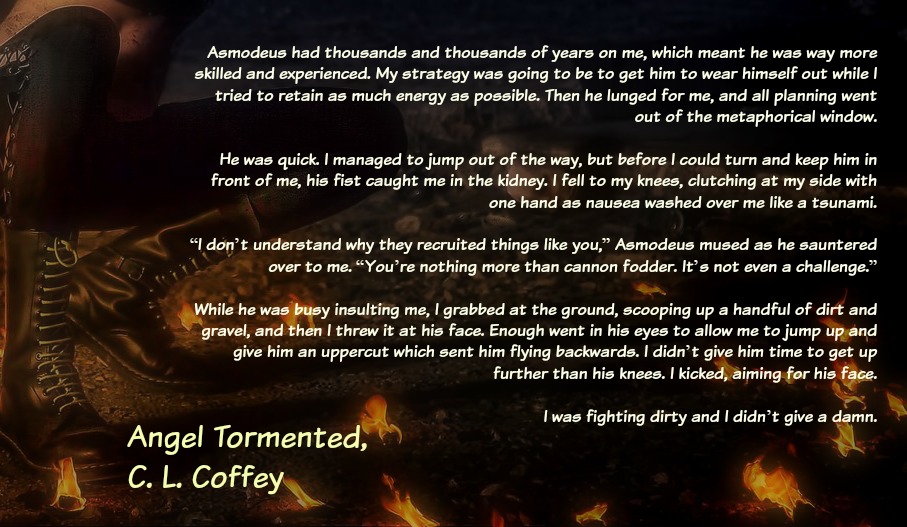 “This is important to you?” Joshua asked, quietly.

“I just want to know the truth,” I admitted. “Not just about those rules, but about everything. I’m supposed to be helping Cupid run that House and I don’t think I’m being told everything.”

Joshua rolled his shoulders before turning his attention away from the water to face me. “I found Darell.”

It took me a second to place the name, then I whipped around on the spot. “Darell? Lilah’s Darell? You found him?” I repeated as a bolt of excitement shot through me.

“That’s only a six-hour drive – less depending on traffic,” I said, already planning on heading back to the convent for an SUV. Okay, it was a day roundtrip, but it was a day out of New Orleans.

“We can leave now if you want?” Joshua offered.

I blinked, looking up at him. “You want to come?”

“Of course,” he said, frowning at the suggestion he wouldn’t. “I get that you can take care of yourself, but it’d be pretty lousy of me to let you go on your own.”

I flung my arms around his neck and kissed him. I was completely prepared to drive to Houston by myself, but the fact that Joshua was willing to come with me relieved some of the tension I was feeling. “Are you ready to go?”

The confused look remained. “You don’t want to run the convent?”

“I think some space is a good thing right now. Besides, if we leave now, we can be back before he notices.”

Joshua still looked concerned, but eventually shrugged. We gathered up the dinner containers and made our way to his car. Soon, we were on the road and New Orleans was nothing but a series of lights in the rearview mirror as we headed out to the west.

No sooner had we left the city and hit the causeway, the rain moved in. It was only a drizzle that seemed worse than it was because of the speed we were moving at, but the sight of the windscreen wipers going back and forth startled me. “How long has it been since it rained last?” I asked.

The question was more to myself than Joshua but he answered anyway. “That was on the news the other day. Apparently there was one storm back in October, but before that was what was left over from Hurricane Tabitha. It’s got the weather guys confused. They seem to think that any raincloud diverts itself before it actually hits the city, and obviously that’s not possible.”

“October?” I muttered. That had to have been the night I had found Joshua in an abandoned house being held at gunpoint with his own gun. If that was the case, that was six weeks ago, and although I had no idea what the average rainfall for the area was, I was willing to bet it was significantly more than ‘nothing’. “I wonder if it’s the work of the Fallen,” I mused.

“I thought the Fallen were more interested in sending hurricanes in our direction?” Joshua frowned. “What benefit would it be to them to stop all the rain? It’s a city, not farmland, and it’s not like we have a drought watch going on. The Mississippi has the highest levels this year thanks to heavy rainfall upstream.”

“I don’t know,” I said as I raised a shoulder in a half shrug. “I’ll bring it up with Cupid when we get back.”

“Speaking of Cupid,” said Joshua. “I realize that I brought up this little road trip, and I’m not against spontaneity, but is this okay?”

“Is what?” I asked, turning to face him. “Discussing the weather?”

Joshua shook his head. “We just took off, darlin’,” he pointed out.

I pulled a face. “On a road trip. It’s not like we’re running away and eloping. We’re coming back tonight.”

Joshua briefly took his eyes off the road to look at me, an eyebrow disappearing under his hair. “Tonight?”

“Yes?” I responded, suddenly confused. “Why wouldn’t we?”

“Because it’s a five and a half hour drive, longer judging from this traffic: we’ll be lucky if we get in before midnight at this rate. Were you just thinking we’re going to turn up unannounced on his doorstep in the middle of the night?”

“Yes?” I admitted. Okay, I hadn’t considered that. Then something else occurred to me. “If you weren’t planning on seeing him tonight, why are we leaving now?”

“You’re the one that wanted to leave straight away, darlin’,” Joshua pointed out. “I assumed you were happy with us grabbing a room at a motel, or something.”

“I don’t have anything to sleep in, much less a change of clothes for in the morning,” I realized.

Joshua glanced at me and gave me a huge grin. “When you didn’t want to swing by the convent, I figured you were happy to be sleeping nude.”

My mouth fell open. “Of course you were,” I grunted, backhanding his arm.

Joshua laughed. “Look, we’re nearly off this bridge, I can turn around and head back, if you like?”

“What were you going to do for clothing?” I asked, curious.

“We’re going to Houston, not the boonies. They have 24-hour stores there,” Joshua chuckled. “I believe you can even get a toothbrush in some hotels.”

I rolled my eyes, a gesture lost in the dark of the car. “Keep going,” I grumbled, reaching for the radio.

I have also managed to get from Cheryl Chapter 1, here it is: https://app.box.com/angeltormentedchapter1 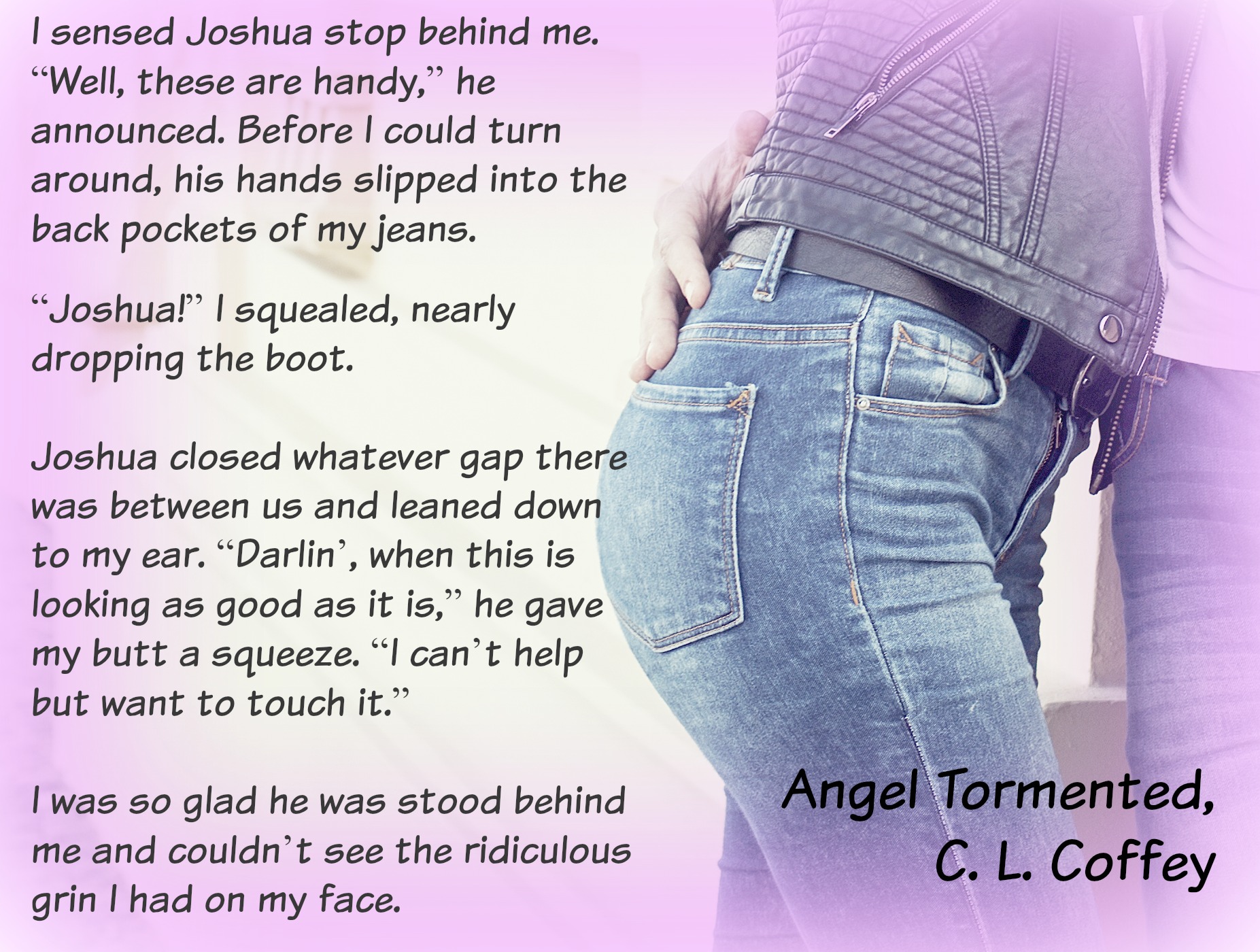 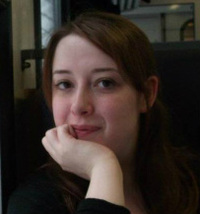 Cheryl works in an office by day. By night she leads a (not-so) secret life DJing, and throughout it all, is constantly scribbling away as the plot bunnies demand constant attention.

Her first novel was written when she should have been revising for her exams. While it is unlikely to ever see the light of day, it was the start of long relationship with the evil plot bunnies of doom.

A need to do more than just one subject led her to the University of Hull, where she graduated with an honours degree in American Studies. For the third year of the four year degree, she was able to call Baton Rouge home. Since then, Louisiana has claimed a large chunk of her heart, and remains a place she will always consider home.

LSU was where she discovered FanFiction and currently writes (mainly) CSI:NY stories and a Rescue: Special Ops story.

When not transcribing the stories of the angels and archangels, working, or DJing, she is at the beck and call of three cats – all of whom rank higher in the household than she does.
I’m more than happy to send out ARCs – please visit www.clcoffey.com for more information.

Finally, please don’t contact me via Goodreads – I rarely check it! If you would like to get in touch, you can email me on cheryl.l.coffey@gmail.com (less)