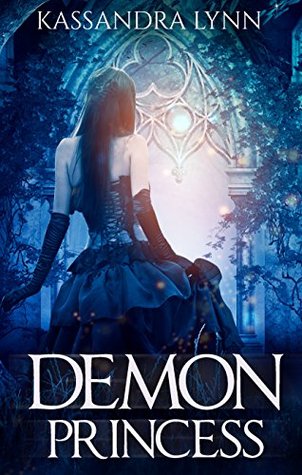 With her father gone and her brother missing, Demon Princess Adriana has to assume the throne, temporarily becoming the Demon King.

The procession is underway, and the princess is nervous yet determined … until the unthinkable happens and she is summoned!

Somehow, Aldric, a mage-in-training has summoned the princess into the human kingdom. Now trapped, Adriana must hide her identity and escape before she loses her life in the hands of her mortal enemies.

What attracted me to Book at first was the cover, I really thought it was beautiful and mysterious and somewhat eerie all together.  Plus that dress is pretty at least from behind LOL!

Though it was published in 2015, I will admit that I had not heard about it then, so I took the opportunity to read and review it when it was made available.

Frankly, I was surprised it was short, a little over 100 pages on my iBooks and it was such a nice and easy read.  We get into the heart of the story and problem pretty much from the start (TY!!) as we accompany Adri to pretty much her own nightmare of being summoned and owned as a “Beast”.   I have to say that with Demons, Mages and some mention of Humans for a second there I thought I was playing WoW!

I really liked Adriana’s character in the story and I could totally understand what she was going through.  It made her very likeable though she is a Demon Princess.  I mean you wouldn’t think you would like or side with a Demon but you see her as a regular person with her own problems and feelings and then look at her where she is in this crappy situation and then the supposed “evil” Demon part no longer really matters.

There is a romantic element to the story, but I don’t want to overshare.  It was brought in really nicely and I am hoping it really works out for them despite everything that stands in the way.  Is it possible that I am a romantic at heart?

As I said, it is a nice and easy read, a really good pace and I really liked all the characters, ok maybe with the exception of Aldric who is pretty much an ass and makes me want to kick his ass (I never realised I could have such violent reaction to fictional characters, who knew?)

So just before I go, here are the books in the series:

Author Bio:
Kassandra Lynn is the author of Book of Immortals series and Demon Kingdom Fairy Tales series. Her favorite genres are fantasy and romance. She especially enjoys reading and writing about unique concepts, unpredictable plots, and protagonists who aren’t the typical protagonists.