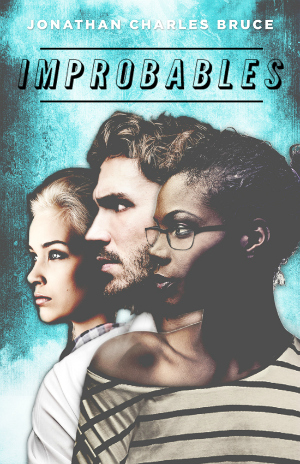 Abigail Wren’s new life fresh out of college is dull, even with her (almost) dream job at the local newspaper. The only real excitement she can get is found between the pages of an endless stream of paranormal romance novels she can’t help but love.

Then, on a snowy night in December, Abigail catches a glimpse of what could only be described as a werewolf. Enamored with the possibility, her investigation leads her to discover a paranormal population—improbables—harmoniously living in the midst of humanity. Between making eyes at a perpetually grumpy werewolf and hanging out with a vampire with a lust for life (and liquor), Abigail’s life takes a shaky step out of the ordinary and into the fantastic.

Just outside of the sleepy town of Whitewater, however, a force of rage is building. Born of hate and delusion, a living cataclysm threatens to devour everyone in its path—human or improbable.

All it had to do is for a character in the book to reference himself as a Red Shirt for me to be tripping and falling in love with it forever!  Now, if you do not know what a Red Shirt is, there is not much I can do for you my friend other than refer you to Google.

All fun and games aside, I thought the book was bloody brilliant.  I will admit at first I was a tad confused thinking the book was going one way and then out of the blue it starts in another.  I gotta say it was super entertaining with Supernatural beings roaming about… oops I should say Improbables and not not Supes. I thought it was really funny when Abigail our main girl is justifying to herself her love for books about vampires, werewolves and angels, and here I am sitting reading a vampire/were story plus the next one on my list is about Angels.  Is that sweet irony?

In the spoiler alert department, this is pretty much how it goes, from reading paranormal romances to actually realising that they are real, how do you react?  And then out of the blue tragedy strikes, nothing makes sense and we are off raiding with a spider.

I really loved the characters of Marley (badass vampire) and Abigail very much, they are not your typical strong female leads but I find them very special in their own way.  I will also admit that I have a little soft spot for Winston too.  They are all of them written very nicely and you really get a strong sense of who they are especially the girls over the guys.  I did get the chance to laugh out on a couple of occasions, I wont tell you where but I have already mentioned them above, so it is up to you to figure it out as you are going to read the book like I did.

I found Improbables to be a really lovely surprise book and it also has a lot of room for the characters to grow and face more adventures in other books.  To be honest, I would love to be reading more and I am hoping that Jonathan is considering it because there is tons of room for that.

As you can see, I really loved it, though at some point I was annoyed at some minor interruptions in between chapters.  I figured out why later, but as I was reading and since you know me by now, I wasn’t crazy about my story interrupted.  When you read the book, you will see what I mean and you will have the same Ahhhhhh moment I did!

I hope you enjoy it as much as I did!!

The trip back to the office was short and uneventful. Parking her car was also characteristically nondescript. On her way to the front doors, Abigail realized that the entire car ride had been on autopilot. Along with that realization came the panic associated with losing a chunk of one’s precious life to monotony. And along with that came a sudden worry that she might have flattened a child without realizing it.

No. Surely that would have been memorable—right?

Right in the middle of a panicked mental recap of the events from picking up her book to arriving in the parking lot, she slammed face-first into a surprisingly warm wall of a person. She rebounded, only now taking in the red-and-black flannel shirt she had plowed into. Her hands shot out in an attempt to keep balance. A moment later, she felt someone’s hands on her forearms.

“Easy there,” came a gruff voice. Pulling herself out of her daze, Abigail looked up at the person she had run into, who was now also, kindly enough, keeping her upright. He was scruffy, a mop of brown hair bleeding into a full (if short) beard worried with the occasional silver strands. His eyes were an intense green, which, coupled with the red in his shirt, gave his appearance an unintentionally festive look. He was pale, but that was nothing out of the ordinary, considering Abigail had forgotten what the sun looked like in the weeks she’d been calling the Pacific Northwest home.

He was cute. In a ruggedly handsome way. Like a grizzled lumberjack.

Perhaps cute was not the word for it.

Abigail giggled, suddenly overtaken with the silliness of what just happened. “Thank you,” she said, certain she was coming across like an idiot. “You can let go now.” She smiled. The man obliged, returning a tight-lipped smile that seemed to err on the side of suffering-the-eccentric.

“Sorry. Didn’t mean to…” he began before clearing his throat, “exist where you wanted to exist at the same time.” He looked every bit as awkward as she felt, which made her own discomfort slightly less overbearing.

She swallowed sheepishly. “It happens.” She suddenly felt the need to clarify what she meant, so she gestured back and forth between the two of them. “Existing at the same time and all.” She realized that the gesture didn’t seem to quite work in the situation, so she let her hand fall at her side as she averted her gaze.

“Try as we might!” he said with an exaggerated shrug. They exchanged unconvincing laughs before silence filled the void, mutated into a pause, then sat long enough to be uncomfortable. While the quiet was maliciously evolving, Abigail couldn’t help but trace her eyes up the man’s exposed and muscular forearms. When she caught what she was doing, she wondered where her unintentional partner’s eyes were glued—no doubt, here was another person in Whitewater who would take any opportunity to drink in the sight of the newest and blackest resident.

Instead, she was a little shocked—and pleased—to see he was staring at the ground. He was legitimately embarrassed for slamming into her. In the city, if someone ran into you it was either a pickpocketing or just a nonstandard and jostly hello. In her hometown, it had been met with an impertinent huff and followed by a subpar apology. Here… well, if this was the first, being bumped into was hardly the worst way to get to know someone.

Hey, mountain man Joe, why don’t we walk into each other in front of a coffee shop some time? she thought. This Whitewater-only pickup line seemed dopey enough to be charming enough to work—and she couldn’t help snickering at the thought.

“What’s so funny?” he asked. She looked up at his eyes which had made a momentary migration to her face.

The smile from her laughter remained unbroken, but grew a touch larger. “Nothing, just, uh…” She gestured to her temple. “I’m hilarious up here, trust me.”

He tilted his head back, enough to give her a full look at what she assumed was post-embarrassment face-saving stoniness. He nodded. “Sorry again.” And with that, he brushed aside her, carrying some intense body heat with him, and walked away. She looked over her shoulder at the man, watching him for a few seconds. Something registered as odd, but she couldn’t quite put her finger on it.

Regardless of what it was that presently pricked at her brain, she shook it off. She had spent weeks feeling exasperated when people felt they were privileged enough to stare at her like a lab specimen; she wasn’t too keen on forcing that behavior on someone else.

No matter how green his stupid sexy eyes were.

She turned around to the glass doors and jolted at the sight of Lacy Renault, the woman in charge of business coverage. A tiny woman in her fifties with short-cropped silver hair, she watched Abigail come in with icy blue eyes and a gotcha-smile. She wore an immaculately tailored red business suit, giving her the appearance of a circa 2008 female presidential candidate.

Abigail stepped into the vestibule, grateful for the limited respite it provided from the elements. “Were you watching that the whole time?” she asked, trying not to look too confused by Lacy’s grin. The expression was becoming a bit too knowing for her tastes.

“You running into Collins?” She asked. She opened her eyes widely, teasingly, and nodded. “Oh, my, yes!”

Abigail shrugged. “Something I should know?”

Lacy gave an embellished frown. “No, no. Just, uh…” She trailed off in the way people do when overstressing a manufactured difficulty with words. “Glad to see you’re taking in the sights.” 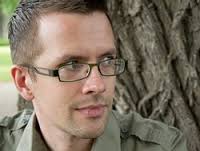 Jonathan Bruce began writing what amounted to terrible Star Trek: The Next Generation fan fiction when he was four… provided that you accept that “forcing other people to write what he said” is the same thing as “writing”. Although the original manuscripts are lost (or perhaps destroyed), we can rest assured that his prose has improved significantly since then. After high school, he began writing and directing plays which gradually improved depending on whom you ask. He discovered his love of a good fight scene after writing a Dracula knock-off which took a 19th century classic and made it less about Victorian yearning and 300% more about stabbing things in the jugular.

He has a Master’s Degree in History, thanks largely to his thesis focusing on MUSIC, a Milwaukee-based school desegregation campaign during the 1960’s. He also enjoys discussing/making fun of pop culture of the 20th century and reading books of a non-historical nature. In his off moments, you can catch him writing for fun or making inane movies about nothing in particular. 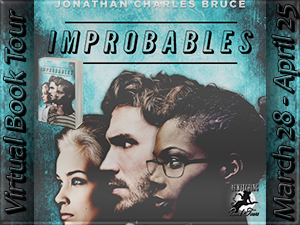