Here we have it, my appetite for Fantasy Greek Myth books never seems to be satisfied and I have here one more offering for you. It should come then as no surprise when I jumped at the opportunity to read and review this baby.  I am really starting to think that that 2016 is going to be the Angel and Myth year for me.  Why not? 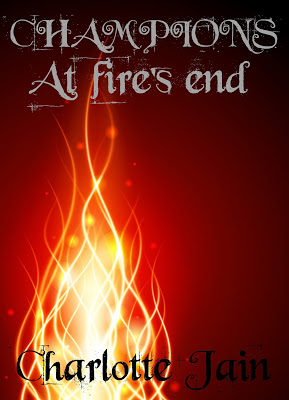 Champions is a little different because it coves old Greek Myth in terms of the battle between the Titans and Olympians.  This is not just about my favorite Olympians being super naughty as usual.  There is a smart twist in this actually. Instead of the gods going at war themselves, they allowed fate to choose 4 humans (2 boys and 2 girls) gave them powers and expect them to end to fight the last battle for them and thus deciding the winners the Titans or the Olympians.

We get to meet April and Kyle our first 2 pair of fighters from the get go and they then end up finding the other 2 Kim and Noah.

April and Kyle are our main characters in the book and everything centers about them and their relationship as warriors and best friends.

However, there is a twist that I admit I never even saw coming, which was brilliant and heartbreaking at the same time.  To be honest, it broke my heart a little bit; it is not because I thought the twist was brilliant that I liked it. Though to be fair it made it all quite a bit interesting!

I will admit that I was a tad confused at first when I was reading the book as to let’s say what was really going on.  I got the general idea per say but I could not tell you if I was accurate to a 100% if you have asked me.  Everything got confirmed pretty much half way and I sighed in relief that I wasn’t nuts.  It is possible that this happened because I was reading the book at 2 am after a long long day of work and of course I was more tired than usual. I don’t know! Which is why I rather share so you know.

Overall, it is a really good read and a great story, the characters are quite complex especially Hermes actually. There is quite a lot going on there and April has a lot going for her and against to make her really interesting.

This should make for a really fun series and I hope to get to the next books quite soon.

Charlotte Jain is an Arts graduate from Melbourne and the author of the Champions series. When not scrawling exciting YA tales filled with magic and adventure, Charlotte enjoys travelling the world and snuggling up on the couch watching movies.