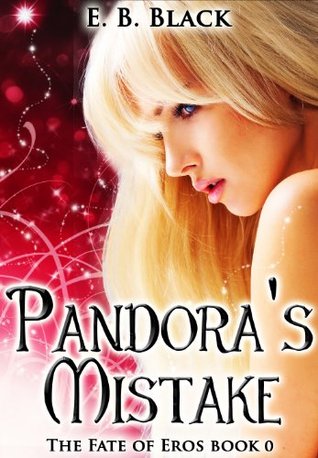 Pandora was created to be the perfect woman. She has the beauty of Aphrodite, the intelligence of Athena, and the gentleness of Hera.

As the first and only woman to exist, Pandora is the center of attention everywhere. Men lust after her, even vow to start wars over her. She’s a good girl, so she keeps her distance.

The problem is Prometheus. He’s Pandora’s box. He’s ripped to shreds and killed every day as punishment from Zeus, but he never repents for being a bad boy.

Zeus has warned everyone to stay away from Prometheus, but she’s curious. He’s handsome and she desires him.

If she opens the box of her desire, it will unleash Prometheus’ inner demons.

Should she risking losing everything she cares about for one night of lust?

You know History and Myth in general has not been really nice to Pandora and at the same time, I always felt really really bad for poor Prometheus (For those who do not know, he is a Titan not an Olympian).  He gave us fire after all and was dearly dearly punished for it.  Plus as you know he is also out creator, at least in terms of Myth.

You know, as I was reading; I thought about that and the title of the book being Pandora’s Mistake, and to be honest and what I really like in the short story is that so yes, she opened the box but let us be honest, the poor thing was set up by Zeus from the start to failure.  As much as I love my beloved Olympians, it doesn’t mean that they do not piss me off!!

I do not want to give too much away and if you are a greek mythology addict like me, you already know and/or can guess the plot but I wanted to say that I really enjoyed the story and I cannot wait to read the read of the series especially if they are all as nicely done as this one.

So if you are looking for something nice and fast to read to keep you busy for a short while, Pandora’s Mistake is a nice one to read.

As they neared the top, a shape came together in front of her. A man laid spread eagle and strapped in chains. His face was pleasing to her eyes, even scrunched up. His beard wasn’t scraggly like Epimetheus’ was and his muscles contorted with barely restrained power. She imagined what he would have looked like if he wasn’t covered in blood. Her stomach somersaulted at the beautiful image.

Every time he screamed, the fireball above their heads grew for a moment and illuminated his shadow. A giant raven sat upon his chest, pecking away at bare intestines. She had seen birds, but never a black one that was almost as large as she was.

It glanced over at Pandora. Its unfeeling eyes glowed white as if it had captured a tiny bit of sun inside its pupils. Green liquid leaked out the side of the raven’s mouth. It foamed at the mouth like it was rabid. Pandora bit her finger nails.

A river of blood pooled from Prometheus’ stomach where his intestines had been ripped to shreds. The raven bent down to peck more inside his belly. He devoured little bits of pink innards. Prometheus was dying or being eaten alive at least.

Pandora tugged on Epimetheus’ arm. “We should help him.”

Pandora could barely breathe. She felt helpless and afraid.

The man screamed and Epimetheus wrapped his arms around Pandora, pinning her to the ground. Fire exploded around them and Epimetheus’ eyes rolled back in pain. The storm of fire above them had gotten so large that a piece of it had escaped and struck Epimetheus’ body.

They both stood when it was over. Blisters covered Epimetheus’ back where his clothes had burned away. She touched the damaged skin gently. He roared in response and she jumped back. The skin sewed itself together before her widened eyes.

She had seen Epimetheus attacked by a bear once. It had entered their cavern in the middle of the night. It had ripped his chest open, but he had regenerated in the same way.

“His name is Prometheus,” Epimetheus said. “He’s already died many times. Titans like us regenerate, but that doesn’t stop us from feeling pain.”

“Why is this man important to you?” Pandora asked.

“He’s my brother,” Epimetheus said. “Zeus chained him here to punish him.”

Pandora crossed her arms. “And you want me to feel sorry for him? He must have done something terrible if Zeus thought he deserved this.”

Epimetheus shook his head. “You have a lot to learn.”

He grabbed her hand and she clutched it tightly. Although Prometheus was restrained, the fire bursting from him was not. Pandora was scared her skin would melt. The crackling of the fire above their heads was deafening and the heat made her eyes feel dry.

Epimetheus read her mind. “It’s not as bad when he’s further from death.”

“We can’t. Our souls do not travel to the Underworld like they do with humans. But our bodies can become so damaged that we black out for hours and lose our heartbeats until we are able to regenerate again. It’s a type of death, but not a permanent one.”

They were near the edge of the cliff, next to Prometheus. It overlooked the places they had traveled since they left the cave. Bright specks from campfires decorated the path. They glowed against the darkness like grounded stars.

“Prometheus suffers because of all those people who live down there,” Epimetheus said. “The reason they have warmth and food is why he’s being tortured, but none of them care anymore.”

Pandora’s chest constricted painfully. This couldn’t be true. Zeus had been such a kind god, explaining things to her slowly when she didn’t understand them. He wasn’t capable of this.

“Some of them cared at first,” Epimetheus said. “But when they tried to loosen his bonds, the crow would devour them instead. Unlike Prometheus, they wouldn’t be able to rise from the dead the next day. He begged them to stop, insisting that he could handle it, but I don’t like the way they flaunt their fires in front of him. They should be ashamed of what they have, rather than callous.

“Every time someone lights a fire, Prometheus dies a little faster that day. It’s why he usually dies at night-people light their campfires and the raven pecks harder. Prometheus gets upset from the pain and those bad feelings make the raven peck harder as well. He dies.

“If all of the humans were to put out their fires and vow to never use them again, Zeus might let him go, but they won’t. Prometheus says it’s because they die without fire, but I think it’s because they’re selfish.

“This is why, as my wife, you are never to light a fire. Fire is his curse, not our blessing.”

The raggedy pile of a Titan lying in front of them moaned. He had also shrunk himself. It was strange that he should care about making humans more comfortable when he was being tortured like this.

He spoke and his voice was hoarse. “Epimetheus, is that you?”

Prometheus cried out and the fire above their heads grew larger. Epimetheus pushed Pandora close to the ground just in case.

The fire died down and Epimetheus knelt next to his brother. The bitterness melted from his face and gentleness took its place as if he were gazing at a beloved pet or baby. He stroked Prometheus’ cheek and the fireballs burning above them calmed. “Shh! Don’t speak! You need to save your strength!”

“Please don’t be angry.” Prometheus’ eyes glowed with love in the light. “To see humanity, my creation, at peace, makes this suffering worth it. I’m glad Zeus chained me here. It allows me to witness all the good I’ve done.”

“Don’t speak that way,” Epimetheus said. “Nothing is worth seeing you like this.”

“Humanity is worth it,” Prometheus said. “The way their skin glows in the sun is the envy of the gods. They’re beautiful.”

Pandora looked down at her arms; the silver flecks in her skin shone in the firelight. Most of the time they weren’t visible, except when the sun was bright or she was near a campfire. She had heard once that humans had specks of gold in their skin, during a time when they could tell the future and walked among gods. Pandora wished she was from that time, rather than from the age of silver, where the wealth and gifts of Mount Olympus dwelled just beyond her reach. But humans had sunk to a new low ever since Zeus took over, which was why their skin had silver in it now. If only she knew the future, maybe she’d be able to understand her world a little better.

“Humans give the gods something to live for and take care of,” Prometheus continued. “They create and love like we do. They are not evil. It’s Zeus that is. Never trust anything Zeus gives you. It will lead to your downfall.”

Pandora’s forehead wrinkled in confusion. She had been a gift from Zeus to Epimetheus. Was he insinuating that she was untrustworthy? How dare he! He didn’t even know her!

Prometheus was sweating. His breathing grew heavier and he went into a seizure.

Prometheus passed out and the inferno above their heads swirled like a tornado. Pandora shielded her face as ashes rained on her. She could feel her arm hair singeing.

“It’s getting dangerous-we need to go.” Epimetheus’ expression hardened as he wrapped his arms around Pandora. She clutched his chest and let him lead the way.

E.B. Black is the annoying author who lives in the head of a nerdy housewife named Elizabeth.

Elizabeth tries to live out her days by walking her dog, spending time with her husband, doing housework, and watching television, but E.B. Black makes her drop everything to type out weird fantasy stories.

Elizabeth is asking anyone who read this to please send help. 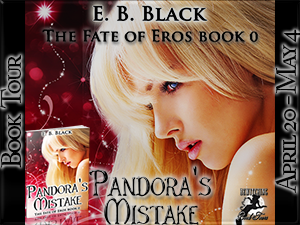