OMG you guys this is one of the few times when I read a book and think that would make for some awesome comic book or movie. I think as I was reading it, I would see it running in my head as an action movie.

To be fair the book starts with pretty much an action sequence à la James Bond movies and I got hooked from there!  Let me give you a little background so you understand more what I am talking about.

The story takes place mostly in Thunder City and Star Haven and the big difference between the two towns is that Thunder City is happy to have Alts (i.e Mutants) living with the Norm(al) population and well in Star Haven they are banned and pretty much hunted and killed. 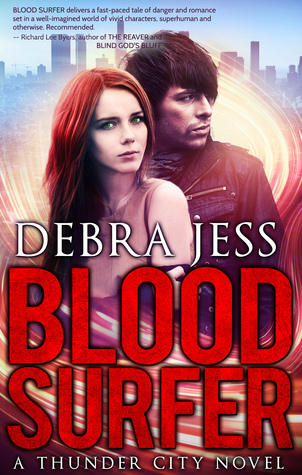 Comes into the story our heroes Hannah and Scott.  Hannah is the daughter of Star Haven’s mayor and an Alt and Scott is an Alt-killer cop there but well he is kinda an Alt too though he doesn’t know at the beginning of the book.

We could just say that Scott and Hannah meet and the rest is history but it isn’t; there is so much going on in terms of the characters their histories and background.  With that in mind, I think Jess did a really wonderful with them and gave them all the layers and complexities to make them really relatable and likeable characters.  There is a lot more to them than their powers.

Though there is a little tiny bit of a romantic element, it is really kept quite discreet and I think it was really nicely done that way, considering the ages of the 2 (18 and 22) it did not need to be too raunchy and that was great because we could focus more on the action than on the romance.

Like I said in the beginning, we have a lot of action, we discover a lot of superheroes and we save the damsel in distress at the end.  So you know with all that action, I was happy and the pace of the book was really matching that.

I know it might sound crazy, but I really could picture it all as a movie as I was reading and that is what made it so special to me.  The writing was really nice and fluid, we didn’t go crazy descriptive (Thank you Debra) and to be honest for me everything was on point.

If you are anything like me, then you are going to love Blood Surfer. I discovered at the end of the book there are also so novellas related to the series but I will add the links below if you are keen like me to get them on your Kindle.

So here you have it, my new recommendation of the day and I hope you love Blood Surfer and enjoy it as much as I did!

The Thunder City Novellas as I mentioned them Above (Also on Amazon):