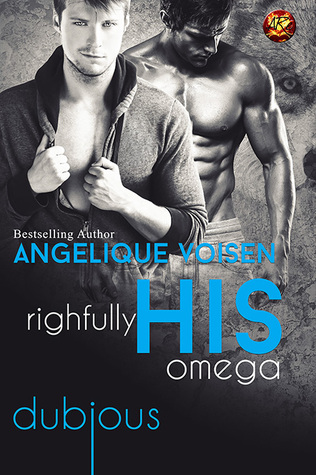 A rare omega, Charlie has experienced and tasted Hell’s finest. When Charlie was twelve, he died and saw his home burned down, his pack rendered extinct, and his fated mate, Caleb, taken. When Caleb returns ten years later, he intends to claim what he lost.

Caleb’s link to Charlie is unbreakable, stronger than any marriage bond. Harder now, scarred, and a reputed killer, Caleb is the kind of dominant werewolf who doesn’t understand the word no. Caleb isn’t the only one who’s changed. Charlie’s all grown up now.

If Caleb thinks Charlie’s going to bend before he breaks, he has another thing coming.

Ladies, is that cover hot or what?  I have a huge soft spot for Taylor (front) and all you need and put him on the cover and I would pretty much read the book no matter what the content is.

Well here we have a werewolf MM romance, and as you know I did not do much MM Romance reading till #Junkie.  But Rightfully His Omega is more focused on reuniting the maters rather than whole process of falling in love etc…

It is a short story and a super quick read, so if I start expanding too much my post might end up being longer than the book (just kidding!!!).  We have love, we have action and we have to steamy hot guys on the cover.

What more can a girl ask for?

Frankly, it is my first book from Angelique and I really liked her style a lot. I love a girl who goes straight to the point!  Thank you!

Charlie Foster finished off his set with a final twirl around the pole onstage. The crowd went wild as the music died. Since Charlie’s leather thong was stuffed full of bills, he scooped up the remaining twenties tossed near the pole before strutting backstage.

He passed by Mark, his roommate and best friend. Dressed in his favorite fireman’s outfit, Mark was ready to go next. “Sounds like a great crowd.”

“Not a bad sweep. A couple of seedy characters hanging by the bar,” Charlie admitted. “Good luck out there, bro.”

Once in the tiny dressing room, Charlie shrugged on a robe. He lit a stick while he counted the bills. Charlie’s fingers trembled with the simple gesture. Although he’d been clean for years, he felt anxious and jittery. God, would he kill for a fix. Charlie hadn’t had a craving for so long, but he supposed anyone in their right mind would go crazy, especially after seeing a ghost from the past. Under the lights, the only accessory he bothered to wear over the years gleamed gold, taunting him.

Around him, other male dancers bitched and bickered. Usually, Charlie would join in because the boys at the Tight Asses strip club have been his family for nearly two years.

Charlie began stripping to pay for his college tuition and bills, but he figured he’d make more taking off clothes than being stuck in a dead-end office job. Working here also had its perks. Some customers asked for extra services, but, for Charlie, it was all in good fun, especially since they played by his rules. Charlie also told his manager Leslie, a fierce scarred werebear, that he got to pick his customers.

Speaking of their manager, Leslie poked his head into the room. “Charlie, a customer wants a private dance.”

Charlie expected the request after spotting the stranger completely cloaked in shadows at the back. He took deep breaths.

I’m no longer the scared little runt who couldn’t defend himself. I’m a fucking grown-up.

“So, who’s the asshole, Les? You know my rules. I don’t do strangers.”

Leslie paused, looking deep in thought. Leslie Meyers might be a business-minded greedy bastard, but he took care of all his boys. Something had scared Leslie, and not a lot of things could do that to the former MMA fighter.

“I can ask security to escort this shifter out, but I can tell he came here looking for a fight. Discrete won’t work with this kind of fucker.”

“So you’re afraid he’ll scare off the other customers?” Charlie asked sarcastically.

Angelique Voisen is a bisexual, twenty-something, type-2 diabetic and multi-pubbed writer who favors LGBT and ménage pairings. She likes experimenting with different sub-genres and her stories may include cogs, fangs, space battles, kinky magic systems and happily-ever-afters.

When Angel’s not writing, she’s gaming, watching B-rated action movies, or enjoying teatime with friends while enviously eyeing their cake.

For more information on other books by Angelique, visit her website: 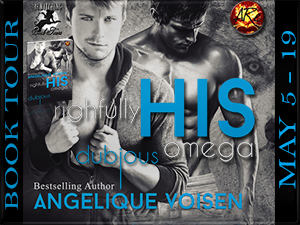