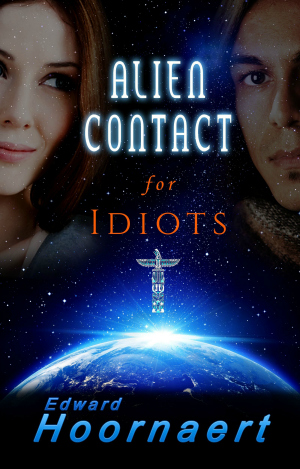 When American Indians from the future move their entire island nation to our Earth, Ell Harmon makes the first alien contact. The take-charge Seattle biologist has yearned to find intelligent aliens, and her dream comes true when she meets Prince Tro Eaglesbrood.

Ell and Tro are quarantined together, while the fearful world wonders whether the newcomers are friends or foes, neighbors or conquerors. Ell knows Tro is honorable and Kwadrans are peaceful … but how to convince the world?

They broadcast a show, which she flippantly titles Alien Contact for Idiots. Every day, Ell interviews Tro and tries to humanize Kwadrans. The show is wildly popular, and the romance developing on-screen between Ell and Tro reassures the world. If a smart woman like her can fall for a Kwadran, they must not be monsters, right?

But Tro’s duty lies with his people, and soon that duty threatens not only the show but Ell’s heart — as well as the peace and survival of our world.

Alien Contacts for Idiots was fun!  How could it not be with this title?

It came at a perfect time when I wanted something light and funny to read and it was perfect exactly as is!  Though a part of me wants to nitpick and say that Tro and his group are not really aliens but humans from an alternate universe. Like I said I am being a pain just because.

But other than that, it was refreshingly fun at times with a really interesting set of characters.  Ell and Tro were quite amusing with their will they or won’t they.. but we have some others that are really fun like Insook (who is a Duke) in the background and add the entertainment and for some hilarious blunders with the english language.  In the beginning Insook would argue a lot with Ivan who is Security but ended up building some sort of friendship build on Ivan teaching Insook the most inappropriate things to say.  I was laughing so hard at some of those antics.

We have of course the relationship between Ell and Tro, I can say that it was really nicely built and with enough obstacles from both sides to make it stand out.  We can all agree that it would have sucked if they had gotten together and fallen in love in less than a chapter.  Plus all of the events that happen (and I am not telling) make it to build their relationship over time.

Like I said in my first sentence Alien Contacts for Idiots was fun, it had a great pace to it, some action with some awesome martial art moves, a love story and some bad guys.  I liked all the characters, some more than others of course but then that is normal and I cannot deny the entertainment factor I had wit it.

All in all a fab easy read.

And if you wall in love with this book like I did, I should warn you that there is already available Book 2 called: Alien Contact for Kid Sisters

In case you haven’t guessed yet, I loved Alien Contacts for Idiots and I cannot wait to find the time for book 2 and I promise to tell you all about it!

“Your vice president reports that your world fears Kwadra’s arrival,” Tro said. “People panic, envisaging the end of the world, or war, or plague.”

“And me going in front of a TV camera is supposed to help?” Ell rubbed sweaty palms on her skirt as she popped to her feet, searching for a way out. There was none. “I’ll do anything else, but not this. I can’t!”

“You wish peace between our peoples, no?”

“Then you must do this thing.”

Hugging her arms, she paced around the long table. A memory of Alki Point Beach sprang to pungent life. At the mention of aliens, the crowd had throbbed with terror and hostility, assuming an extraterrestrial invasion. So Tro was right, but still … her, on TV?

“This Yoda is a wise man. Together, Ell, we can do anything.”

His gaze warmed her and roused thoughts of some of the things she wanted them to do together. Banishing the thoughts with regret, she said, “He’s a puppet.”

“A puppet. Yoda is just a darned puppet.”

Grinning, Tro urged her toward the Arbutus Room. “My role is to reassure and seem friendly. Yours is to ask questions specified by your government and to look, they said, like the girl next door.”

“Girl next door, I can handle that. No, wait. Next door to old Mr. Applebaum the baker, or an alien from another world? Huge difference.”

Alien Contact for Idiots will be $0.99 during the tour.