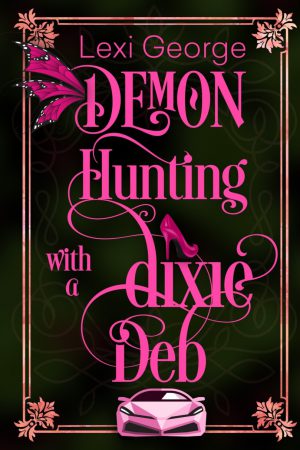 This Debutante Is Having A Ball!

Way down south in the land of cotton, one belle’s plans are soon forgotten–when Sassy Peterson drives her Maserati off the road to avoid a deer and lands smack-dab in the proverbial creek without a paddle. The Alabama heiress should have known something weird was going on when she saw the deer’s ginormous fangs. Hello, Predator Bambi!

But nothing can prepare her for the leather-clad, muscle-bound, golden-eyed sex god who rescues her. Who wears leather in May? That’s just the first of many questions Sassy has when her savior reveals he’s a demon hunter named Grim. Also: Why would a troop of fairies want to give her magical powers and rainbow hair? Why would a style-challenged beast called the Howling Hag want to hunt her down?

Most importantly, what’s a nice debutante like Sassy doing in a place like this anyway? Besides feeling Grim . . .

It was only when I was about half way through Demon Hunting with a dixie Deb that I realised that the book was part of a series.  I love love it when I discover fun reads like that book is but it annoys the crap out of me when I do not know from the get go that the book belongs to a series.  Demon Hunting with a dixie Deb works well as a standalone and I enjoyed it very much without having read the other books in the series.

However, I am planning on doing so as soon as I get a couple of days to myself to do so as I have found Lexi’s writing to be nice and fluid and with a good pace.  The character of Sassy was really surprising and something else and I found her to be the perfect counterpart for more serious Grim the demon hunter.

Demon Hunting with a dixie Deb was really entertaining and I got really a good laugh in certain parts and that was very welcome, I mean we have gods, I have never heard of, imps, fairies, demons, ghosts… yeah we are nose deep in Supernatural.  Though we go through some doom and gloom and very dark subject as death and chasing demons, the light brought in by our main girl Sassy balances everything out with her sunny disposition.

I am going to look forward to the next book because now I am hooked, and I really found it refreshing that though it is a Paranormal setting, it was not too dark and there were really funny bits.  In my most recent paranormal books, they were all so serious, and you know I loved them; but this was really a nice change and wonderful approach to the genre.

So for those who want a good time, this is the one for you!

With a drowsy sigh, she relaxed against him and went to sleep.

Grim stilled. A surge of lust hit him, hard and fierce. Sassy smelled delightful, a dizzying combination of summer roses and female. Curling tendrils of her hair lifted to caress his jaw, like flowers reaching for the sun.

I am her sword and shield. The vow rose unbidden in his mind. Here and now I vow to protect her, from anyone or anything that threatens her.

An admirable sentiment, I am sure, the Provider said, but hardly necessary. She leaves tomorrow, and you return to the hunt. That is good, is it not?

Then why the hollow ache in his chest? 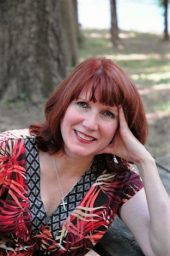 Lexi George writes snarky, Southern-fried paranormal romance for Kensington. Her debut novel, Demon Hunting in Dixie, was released in 2011, and a novella and two more demon hunter books followed. Demon Hunting in a Dive Bar, the third book in the series, was nominated for a RITA in 2014. The fourth book, Demon Hunting with a Dixie Deb, is due to be released May 24, 2016. Lexi enjoys reading and writing romance, but her first love is fantasy.

A Meddle of Wizards is the story of Raine Stewart, a sheltered, sickly young woman who comes into her own when she’s transported to a magical world, discovers her burgeoning powers as an adept, and faces the evil wizard who killed her parents. Lexi’s day job as an appellate attorney requires reading transcripts filled with murder, mayhem, and worse. Perhaps this is why she enjoys stories filled with humor, action, adventure, and magical creatures. She has a violent aversion to sad movies, having been scarred by Old Yeller at the age of nine. She drinks tea, not coffee, and has never seen The Exorcist, because she is a world-class chicken. She is the third of four children, with all the attendant neuroses. 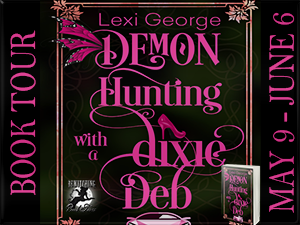