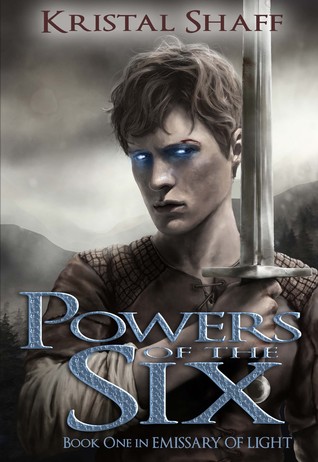 Powers of the Six by Kristal Shaff
My rating: 5 of 5 stars

I wanted to start this post by apologising for not posting on time and hardly anything these past few days.  To keep a long story short, I was not able to for personal reasons and I wanted to apologise to the hosts I have let down.

Back to the Powers of the Six…

I have one word to say and it is just plain WOW!

Most recently, I got into those books like The Midnight Sea and Sunbolt which all are around the same style and ambiance and Powers of the Six is definitely joined those 2 books as part of my “blown Away” books but being so unexpectedly bloody well brilliant!

We start off with Nolan hiding a massive secret from his employer, his brother, the King and pretty much everyone. What Nolan is hiding is a power and the power of Accuracy to be precise. In fact, there are 6 of those powers, and people get randomly one of them and if those powers manifest well they have no other choice than joining the King’s army.

Did I mention the King was evil?

I did not? Well here you have it plus to make it all worse, Kael (Nolan’s older brother) is the King’s general and has the power of speed.

This should give you a broad general background to the beginning of the book and I am going to try to not give away any more.

I felt that the beginning of the book was on the slow side, it took its sweet sweet time to build up but once you go there it was an amazing surprise. My biggest regret is that I was not able to finish it in one go like I usually do as I was not feeling well, but let me tell you that it was great!

We have super villains, horrific back stories, evil bad guys that I mentioned already, a new deity and a set of wonderfully diverse characters surrounding Nolan such as Alec, Emery and Greer.

We get gruesome fights, action, adventures, new powers… we are talking pretty much epic content! I will to tell you that somewhere near the last quarter of the book where it goes to even higher levels of amazing, I found myself crying during a specific event!

I can freely admit, that my heart stopped and then broke!

That did not last too long, luckily enough but again I said before it was amazing. I will admit that at the end of it , I did not realise it was going to be part of the series until I flipped the page and saw the first few pages of book 2.

Can I say that I would not have minded the book finishing right there and then?

Frankly guys, if you have enjoyed the other books I mentioned above and are into this genre, this is the book for you!

Krystal did an amazing job with the creation and the setting of the backgrounds and the history surrounding this land and the characters. Speaking of characters, they were really relatable and could empathise with them. We discover that some of our heroes were less than perfect before, but that makes them more human and it is impossible not to like them.

A special mention to Alec’s dad, where I wanted to kick his ass!

As I said, it started on the slow side, but Powers of the Six maintained a great pace, wonderfully epic action and it was an amazing adventure!

In case, you are still not sure what to think; well I highly recommend it and I cannot wait to see the adventures of Nolan and the others in Book 2!