Still reeling after killing the man she loved, Atropos turns her attention to the twin tasks of avenging his death and freeing humanity from the deadly grip of the Keres. When she sets out on a murderous mission to retrieve her shears, her only aide is her temperamental ex-boyfriend, Ares. He is fickle at best, traitorous at worst, and assistance from him may be worse than none at all.

Along the way, she allies with a group of powerful supernaturals and learns that the crimes of the gods are more twisted and far-reaching than she realized. What begins as a quest for vengeance becomes a journey through betrayal, loss, love, and hope. It ignites a war that will pit Atropos against the gods in a battle for the freedom of humanity.

Avenging Fate is the second book in The Threads of Moirae Series by Jennifer Derrick.

When we reach Alex’s house, I’m not surprised to see that it’s been vandalized. With no residents to defend it, it was easy pickings. The front door’s been kicked in and the frame is splintered so it won’t close properly. A couple of the windows are broken, too. Once we’re inside, I’m relieved to see that most of the damage is limited to the kitchen. Whoever came here was looking for food and not much else. The presence of a rotting, stinking corpse on the kitchen floor probably made them hurry up and get out.

I leave Ares and Elaina to gather up any dog food and supplies they can find as I make my way down the hall to Alex’s room. Stopping in the doorframe, I grip it hard to keep myself upright. The memories and the grief come fast and hard, threatening to overwhelm me. The hospital bed is still in the room, as is most of the medical equipment that kept him alive those last few days. No one’s made the bed, so the sheets are still rumpled from Alex’s body.

The IV still hangs on the pole next to the bed, and the oxygen tank is on the floor under the bed. The needle and tubing for the IV and the cannula for the oxygen rest on the mattress where I dropped them the night I took Alex away from here to die in peace. The book we were reading together lies facedown on the mattress, open to the page where we left off. Everything is frozen in time, except the most important part. Alex is gone and he isn’t coming back.
Alex’s bookcases still droop alarmingly, although they aren’t as orderly as they once were. It appears the looters rifled through them, probably looking for stray cash tucked in the pages of the books. I force myself to cross the room and scan the shelves for anything that might indicate where Emily has gone. I also check the desk, but find nothing in either place.

I cross to the bed and can’t help myself. Picking up the pillow, I hug it to my chest, burying my nose in it. I catch the last whiff of Alex’s shampoo, the same fruity-spicy scent he always used. I’m aware this isn’t good for me and it’s not helping us with our mission, so I reluctantly put it down. But I can’t resist one other thing. Grabbing the book, I fold down the corner of the page we were on and tuck it in my waistband next to the gun. It’s sentimental and dumb, but I want to remember our reading time.

When I turn to leave, Ares is standing in the doorframe, watching me with an expression that is both pitying and concerned. I can stand the latter, but I don’t need his pity.

“Don’t say anything,” I warn as I push past him and head down the hall toward Emily’s room.

“I just came to see if you’re okay. I figured this would be hard for you.” Four Truths and a Lie with Jennifer Derrick

Today we’re going to play a game: Four truths and a lie. I’m going to tell you five things about myself. Four of them are true and one is complete fiction. This is just a fun way of helping you get to know me.

Skip down below the image to read the answers and explanations after you make your guesses.

1. I ran a half-marathon on Saturday followed by a full marathon on Sunday, making a weekend total of 39.3 miles.

2. I had the honor of meeting Darth Vader.

3. Growing up, I wanted to be a doctor and performed surgery on all my stuffed animals.

4. I studied at Oxford University.

5. When I got the email confirming that Broken Fate was going to be published, I was cleaning toilets.

1. True. Yep, I was stupid enough to do that. Even stupider, I did it before ever completing a half or a full marathon on their own. Disney introduced something called the “Goofy Challenge” which is a half marathon on Saturday and a full on Sunday. Being a Disney nut and the sort of person who likes a ridiculous challenge, I had to do it. Twice. The fact that the second was followed by a lot of physical therapy isn’t something I dwell on.

2. True. No, I didn’t meet James Earl Jones, but I did get to meet the man who wore the Vader suit. His name is David Prowse and I met him when I was a kid, not long after the original Star Wars came out. He came by our mall and autographed pictures (and he wore the suit). I still have my picture, somewhere.

3. Lie. Unlike a lot of kids, I never entertained the idea of being a doctor. I don’t like ick and being a doctor is an ick-heavy profession. My stuffed animals were never my patients. I did want to be an astronaut, though, and even went to Space Camp a few times and started college as an aerospace engineering major before changing to something else later on.

4. True. I did a semester abroad at Oxford during college. Best experience of my life. I highly recommend that anyone who has the chance to study abroad do so. Side note: My professor gave everyone silly awards at the end of the term and mine was a mock Oscar for my portrayal of “The Invisible Woman.” Why? Because I spent so much time touring the country that I “forgot” to go to class a lot of the time. Still passed my classes, though.

5. True. You want your publishing story to be something glamorous, but mine totally wasn’t. When Clean Teen Publishing emailed to tell me that they were accepting my book and offering me a contract, I was cleaning the toilet. My phone was on the counter next to me and I checked it when it dinged, thinking it would be spam. Fortunately, I had a place handy to sit down because I was shocked by the news. 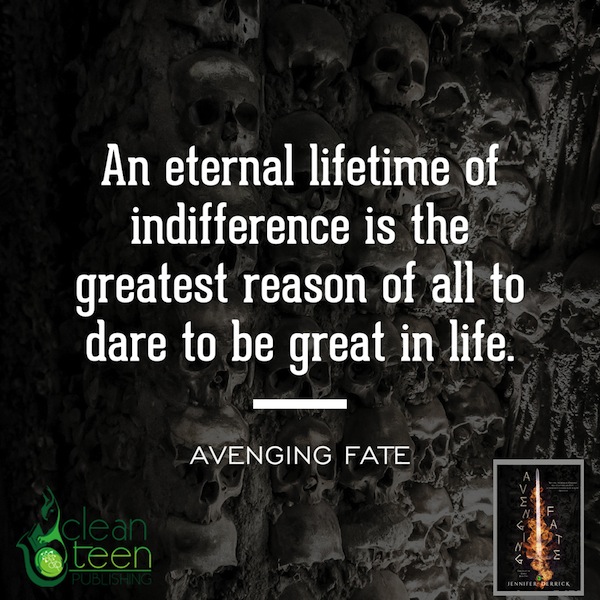 Jennifer is a freelance writer and novelist. As a freelancer, she writes everything from technical manuals to articles on personal finance and European-style board games. Her interest in storytelling began when she was six and her parents gave her a typewriter for Christmas and agreed to pay her $.01 per page for any stories she churned out. Such a loose payment system naturally led to a lot of story padding. Broken Fate, her first novel, earned her $2.80 from her parents.

Jennifer lives in North Carolina and, when not writing, can often be found reading, trawling the shelves at the library, playing board games, watching sports, camping, running marathons, and playing with her dog. You can visit her at her official website:www.JenniferDerrick.com.