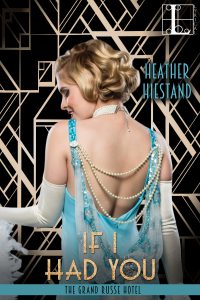 If I Had You
by Heather Hiestand
Genre: Historical Romance

Inside the glittering walls of a famous hotel, an ingénue experiences first passion . . .

As she stands before the gilded doors of The Grand Russe Hotel, Alecia Loudon is poised on the threshold of a profound awakening. It is the Roaring Twenties, and London is buzzing with opportunities for adventure . . . and indiscretion. The young personal secretary knows nothing of the ways of men, but a chance meeting with the hotel’s handsome night watchman sets her imagination afire.

Ivan Salter has noticed the quiet Englishwoman and wonders what delicate beauty might be lurking behind Alecia’s plain clothes. As the handsome Russian draws Alecia further into the hotel’s luxurious world, he introduces her to fine food, cool jazz, and forbidden assignations. Their dalliance is tested, however, by a surprising link between Ivan’s family history and Alecia’s bosses. Tangled up in international intrigue, the lovers must decide if their sparkling new romance is worth the cost . . .

His teeth were exposed by his widening smile. The top row was perfect, but his two lower front teeth were just a little crooked. She fell in love even more. In lust?

“You knew you would see me tonight. I am the watchman.” “Very well then.” She lifted her chin. “It is unlikely that I am

looking to be kissed. I like to wander and have never been kissed.” “Never, myshka? Such a pity. You are somewhat pretty.”

“How dare you!” Outrage bubbled in her lungs. She could not find any other words.

But the truth was, she could find another thought, even if she couldn’t say it aloud. She wanted to be kissed. By him. 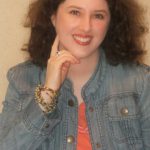 Heather Hiestand was born in Illinois but her family migrated west before she started school. Since then she has claimed Washington State as home, except for a few years in California. She wrote her first story at age seven and went on to major in creative writing at the University of Washington. Her first published fiction was a mystery short story, but since then it has been all about the many flavors of romance. Heather’s first published romance short story was set in the Victorian period and she continues to return, fascinated by the rapid changes of the nineteenth century. The author of many novels, novellas and short stories, she makes her home in a small town with her husband and son and supposedly works out of her tiny office, though she mostly writes in her easy chair in the living room.

September 12: Up ‘Til Dawn Book Blog

September 14: Straight from the Library

September 23: Notes From a Romantic’s Heart

September 27: Where the Story Comes First

October 7: Queen of All She Reads