“My Brown-Eyed Earl is a fun and lovely story that’s heartwarming and joyous. Bennett’s engaging hero and heroine are nothing compared to 6-year-old twins who steal the show and readers’ hearts. But it’s more than characters that make this a wonderful read, it’s the heartfelt storytelling and depth of emotion as the characters growth takes center stage and a second chance at love seems possible. A delightful read!”

“Heart, humor, and a hot hero. Everything I look for in a great romance novel!”

— Award winning author Valerie Bowman on I Dare the Duke 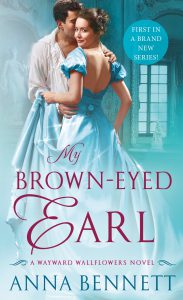 Miss Margaret Lacey is brainy and beautiful, but she’s also penniless, and at the ripe old age of twenty-three society has declared her a spinster. For her part, Meg is less concerned with her empty dance card than with her empty bank account. She resolves to make her own way as a governess but discovers her new employer is the Earl of Castleton—the vexingly handsome man she rejected one fateful day, eight years ago.

William Ryder has never forgotten Meg, the elusive girl next door who claimed she’d rather shave her head than marry him. Now she’s the governess, but Will plans to teach her a few lessons of his own. As stolen kisses lead to passionate nights, Will and Meg just might find true love where they least expect it…

This is a good one guys!

Both Margaret and William are quite an interesting pair for certain and I love their back story!  It is not every day that a girl says she wants to shave her head than marry a cute guy!

It was really sweet and funny and touching and I really loved how they fell in love.

Frankly, the book was really super nicely written and had a great pace to it, we had some adventure to it as well.  I really loved the style and I cannot wait to be reading more books from Anna in the future. Honestly, if it is something like this one, then it is going to be a jolly good time for sure!!

Out of the 2, I kinda liked William better, no there is nothing wrong with Margaret but I liked him from his first introduction and that boy made me smile quite a lot.  I know me and my habit of liking the male characters slightly more but I can promise you that Will deserves it.

Now let’s talk about the cover! OMG isn’t it totally pretty? I love that shade of blue and the artist did a really fantastic job with it!  This is one of the times where I wish our Kindles are not just all those shades of grey!  It does this beautiful cover disservice.

I read the whole book in one sitting and I could not put it down, that ought to tell you something in terms of me enjoying it quote a lot.

So for this reason I am going to recommend it quite highly and I am going to try and find the other already published book from Anna as this is my first one and get to know her other books better.

I hope you enjoy reading My Brown-Eyed Earl as much as I did!

Will leaned forward on his elbows and pinched the bridge of his nose. Somehow, in the space of a week, his highly ordered, luxurious life had fallen apart.

First, Marina, the beautiful widow he’d been seeing, hinted that she wanted more than the mutually pleasurable arrangement they’d agreed to, forcing Will to break things off with her.

Next, his recently deceased cousin’s mistress showed up on Will’s doorstep with the twin girls, threatening to leave them at an orphanage unless he took them in.

And then last night, he attended a dinner party in honor of his mother’s birthday. In front of a dozen guests, she announced her sole wish: that her son marry before she turned fifty—in exactly one year. After choking on his wine, Will promised to give the matter some thought.

Then he had gone directly to his club and drunk him- self into oblivion.

Jesus. He stood, ran his hands through his hair, and checked his reflection in a mirror between a pair of book- cases. Gibson was right—he looked like hell.

Bad enough to scare off a potential governess.

He swiped the cravat off his chair, slung it around his neck, hastily tied it in some semblance of a knot, and but- toned his jacket. There was nothing to be done about the stubble on his chin or the faint imprint the desk blotter had left on his cheek, so he threw back the rest of his coffee and congratulated himself. Within the hour he’d have a governess to manage the twins, and at least one aspect of his life would be set to rights.

Gibson was already shuffling down the corridor. “My lord,” he intoned from the doorway, “may I present Miss Lacey.”

Will blinked. Lacey . . . it was a common name. Surely the potential governess couldn’t be—

She glided into the study and cast a wary look his way.

Dear God. It was her. The vicar’s daughter who thought she was too damned good for him. Standing in his study, cloaked in a drab dress that might have been lilac once but now more closely resembled gray. No ribbons adorned her brown hair. No ringlets framed her face. In fact, the only decoration she wore was the light smattering of freckles across her nose.

The butler raised his bushy brows. “I was not aware that you were already acquainted.”

“Thank you, Gibson. That will be all.”

The butler left reluctantly, closing the door behind him. Miss Lacey pressed her lips together as though she longed to say something and silence herself at the same time. From what he recalled of her tongue, it was best kept under lock and key.

“What on earth are you doing here?” Will demanded.

“Applying for the governess position. I assumed you knew.”

“I see.” She glanced over her shoulder at the door. “Per- haps it would be better if I—”

“Be seated, Miss Lacey.” He inclined his head toward the armchair in front of his desk.

She hesitated, and for a moment he thought she’d refuse. But then she walked toward the chair, looked at the seat, and froze. Just as stubborn as he remembered, unbiddable as ever.

He bristled. “Perhaps you’d prefer to remain standing for the entire interview?”

“You object to meeting in my study?”

She narrowed eyes that were not quite green, but not quite brown either. “No, but I hoped to avoid sitting on this.” In one, fluid motion she leaned over the chair, picked up a pink, lace-edged scrap of satin between her thumb and index finger, and dangled it in front of his face.

Lord Castleton snatched the frilly handkerchief from Meg’s hand. He started to stuff it in his pocket, apparently thought better of it, and shoved it into a desk drawer. “Let me assure you, Miss Lacey. Nothing untoward has occurred here in my study.”

Perhaps not. But something untoward had definitely occurred somewhere.

Meg sat in the chair in front of his desk, glad she no longer had to rely on her shaking legs for support. “I’m certain that’s none of my concern.”

She was curious, though. If her parents had had their way, the man who was now sitting across from her and cursing under his breath would have been her husband. Difficult as it was to fathom, she would have been his countess, probably blessed with a couple of children at this point.

The sight of him now, sporting rumpled clothes, a scowling face, and a foul mood, made her think she had dodged a rather nasty bullet.

Anna Bennett started swiping romances from her mom’s bookshelf as a teenager and decided that books with balls, dukes, and gowns were the best. So, when she had the chance to spend a semester in London she packed her bags—and promptly fell in love with the city, its history, and its pubs. She dreamed of writing romance, but somehow ended up a software analyst instead.

Fortunately, a few years and a few careers later, Anna found her way back to writing the stories she loves and won the Romance Writers of America’s Golden Heart®. She lives in Maryland with her husband and three children, who try valiantly not to roll their eyes whenever she quotes Jane Austen. Other weaknesses include reality TV, cute shoes, and coffee. Lots and lots of coffee.