Nathan Davenport is being stalked by Isabella Ravini, the feral vampire who stole his human life over a hundred and sixty years ago. She made him her fledging, a slave for her dark, evil purposes-hunting humans. After a few years she released him, and Nathan reluctantly learned to accept the cursed life she’d foisted upon him. Over time he amassed a great fortune, which today has made him famous worldwide. Isabella decides she wants to be a part of this world of fame and fortune Nathan created for himself. She’s determined to marry him, and love has nothing to do with it. His money is her primary target, and the fame and prestige attached to being the wife of one of the richest men in the world wouldn’t be so bad either. In an effort to evade her until he can figure out how to stop her, he hides at a safe house he owns in New Orleans.

One Saturday evening in NOLA, he decides to have dinner in the city. He chooses a quiet little Italian bistro, never imagining this night will change his life forever. The human woman who delivers his order isn’t a server, but the restaurant’s sous chef, a beautiful ethnic woman possessing the most delicious blood scent he’s ever encountered. The moment Mia Peebles arrives at his table with his plate, tasting her becomes an obsession. Mia wants nothing to do with him because of Nathan’s reputation as a playboy. So Nathan enchants her, feeds from her, but his lusts for her blood and body play havoc with his thinking. Nathan finds a way to bring her into his life as his personal chef and quickly falls in love with her. The trouble is Mia has no idea he’s a vampire because during the enchanting episodes, Nathan blocked her memories of those sensual encounters. How will Nathan tell her the truth without losing her and keep Isabella from finding him? Or worst yet, will Isabella discover how much Mia has come to mean to him?

It has been ages since I have read a proper vampire story and can I say that when reading Forever and a Night, I realized how much I actually missed the.  I kept trying to think which vampire books I read last and all my mind could conjure is the final book of the Sookie Stackhouse novels by Charlaine Harris.

Forever and a Night is a really lovely way to get back into these books and I really liked it a lot. I finished it one go and it was a smooth easy read.  We have a few interesting characters and a very evil baddie, so all in all plenty to keep me entertained for a few hours.

I think the more surprising element that I never thought to read about in this type of fantasy novel is the presence of Christian religious elements.  I mean it is fair enough for one to question faith and religion when you meet a vampire and that goes against everything you have been taught your whole life, but it was there and it felt to me that it had a very solid presence in the book pretty much as a character.  Of all things, I never saw it coming and the reason I mention it is for my readers who may not be very religiously inclined.

When I say this, it is not a bad thing, like I said I never expected it to be this present, even if Mia our leading lady is very devout.

I have to say that I really loved Julia (Nathan’s friend) quite a lot in the boo, she was really interesting and she sure has an intriguing back story on how she met her husband.   Saying that, I am not sure if a series is planned to cover various characters, I know I would love to see Christian (the doctor) find a mate and TJ (Mia’s eldest daughter) have her own storyline.  There is really room here for a lot as I enjoyed the characters very much as I am clearly attached to some of them.

All in all, this is really a lovely read and I enjoyed it very much.  Forever and a Night is really very nicely written and I am now very curious as to any other books Lana has written, I will need to investigate this further and I am going to highly recommend it if you want a good book. 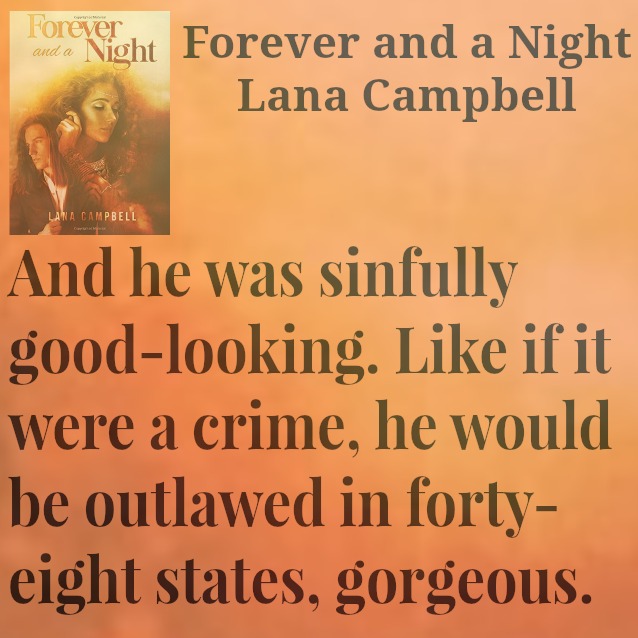 Excerpt:
He appeared disappointed, but Mia didn’t care. She hadn’t dated since her divorce. Hadn’t had time and certainly tonight, she had no time for a guy like Davenport. The man would have been a temptation for a nun. She’d lived like one for the last five years because work left her no time for a social life. However, she wasn’t thinking very sisterly thoughts at the moment, which solidified her refusal. That and the fact he was Nathan Davenport. Dating required commonalities. She couldn’t think of one they might share. She’d taken several steps away from the bar when she heard him speak.
Mia, look at me.

His voice had taken on a deep hypnotic tone, which seemed to echo in her head. In fact, it seemed to only be in her head, not audible. The strangeness of that reality should have been terrifying, yet something compelled her to turn and face him. She sat her dishes on the bar.
“Come with me.” He gave her a kind, reassuring smile.

She opened her mouth to say, Hell, no, but the word that came out instead was, “Okay.” Her heart tumbled over in her chest.
Mia realized she was seriously losing it because she allowed him to escort her out the front door of the restaurant without a peep. As hard as she tried to get her feet to obey her mind’s order to run back inside the restaurant, they were useless. They just kept taking her the direction he led them. Her voice was useless too. Her jaws felt locked. She began to pant and look around.
Mia, relax. You have nothing to fear. I’m not going to hurt you.

Her gaze, wild and crazy, she was sure, shot toward him. His words and voice had been in her mind. She hadn’t heard them audibly.
Oh god, please tell me this is not real, that I’m going to wake up from this any second.
He gave her a reassuring smile and took her hand. She wanted to yank it away and use both to scratch his eyes out, but she couldn’t move them either.
You will be afraid no more. Understood?

As his words filtered through her head, fear evaporated, and her breathing and pulse gained normal momentum as desperately as she tried to fight both. He must have drugged her. That was the only explanation Mia could come up with, because her mental and physical control were history.
She looked around to gain perspective. Everything seemed surreal. All the Bourbon Street noises and smells were alive to her senses yet distant, all stationed in a tunnel, contained with her in the midst, separate yet, apart. Nathan stood beside her, holding her hand. At some point, a long black limo pulled up to the curb. He opened the door and gently ushered her inside. She perched on the edge of the plush ebony leather and stared forward, vaguely aware of her surroundings. She felt Nathan settle in beside her, but her mind still held the strange, trancelike state, which made her ambivalent to the atmosphere or danger. It was all so illogical. Somewhere way in the back of her mind, she knew fear would have been a handy tool at the moment. She wanted it more than anything but couldn’t scrounge it up.

“Mia, look at me.”
The only option was obedience because she couldn’t think for herself. This had to be a dream because she had zero control over speech, thoughts, or motor skills beyond those he commanded.
His expression was gentle and warm. He reached up and trailed the back of his fingers across her cheek. “I’m not going to hurt you, little one. You won’t feel pain or fear, only pleasure I promise, which even that you won’t remember come tomorrow.”
Mia just blinked at him. None of what he’d said made sense, until he leaned in and captured her lips. That ambient part of her, which kept protest or any other actions at bay, broke free when he began wreaking some major havoc on her mouth. She drove her fingers into his hair and pressed in, taking all he gave and returning more and then some. 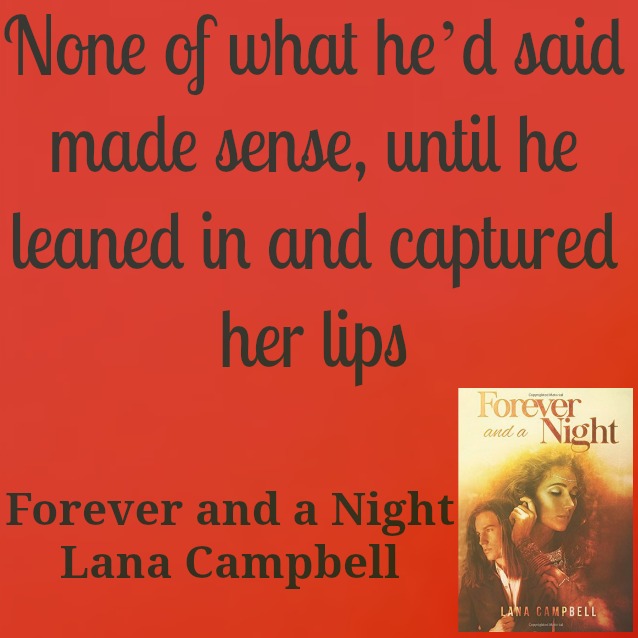