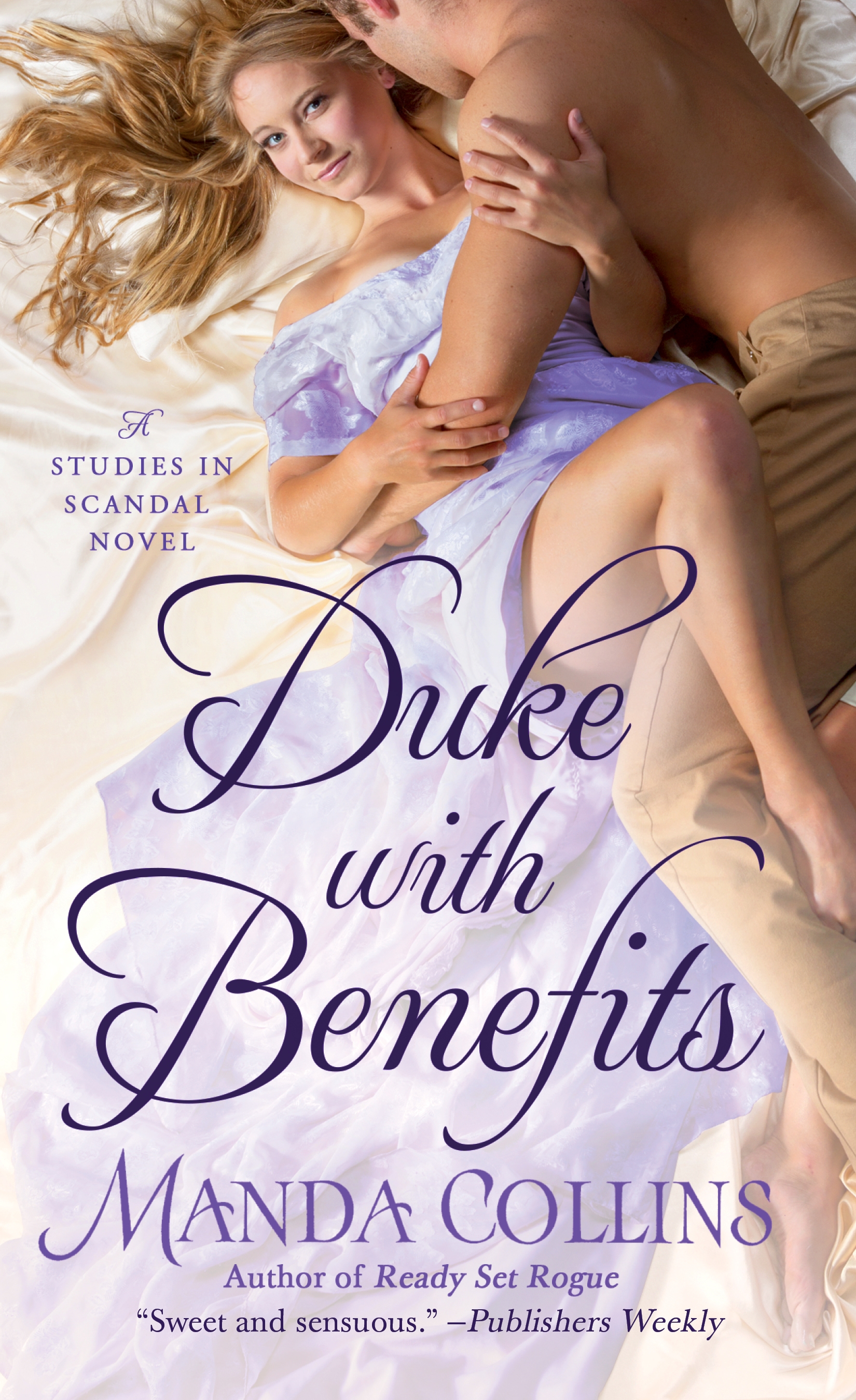 Lady Daphne Forsyth is a brilliant mathematician with a burning passion for puzzles. When she learns that the library belonging to her benefactress houses the legendary Cameron Cipher—an encrypted message that, once solved, holds the key to great riches—Daphne is on the case. Unfortunately, her race to unlock the cipher’s code is continually thwarted by a deliciously handsome distraction she hadn’t counted on . . . and cannot resist.

Dalton Beauchamp, the Duke of Maitland, is curious as to why Daphne is spending so much time snooping around his aunt’s bookshelves. He’s even more intrigued by her bold yet calculating manner: She is unapologetic about her secret quest . . . and the fiery attraction that develops between them both. But how can they concentrate on solving a perplexing enigma once the prospect of true love enters the equation?

Duke with Benefits is the second in Manda Collins’ Studies in Scandal series set in Regency England.

“There you are, my dear,” said the Earl of Forsyth with a beaming smile that didn’t quite reach his eyes.

Maitland saw at once that Daphne favored him. Her green eyes were the same shade as his, though there were lines of dissipation bracketing the earl’s. And though his expertly cropped blond hair was shot through with silver, what remained of its original color was the same shade as hers. But whereas Daphne’s gaze was focused off to the left of whomever she conversed with, like a bird hovering just over a branch, Forsyth’s speared one with cold calculation. As he did to Daphne now.

“You are looking well, Daphne,” the earl continued, stepping forward to embrace his daughter, who looked as uncomfortable with the contact as Maitland had ever seen her. “The sea air agrees with you. As I knew it would.”

“The sea is very beautiful,” Daphne replied woodenly. “Why are you here, Father?”

“Is that any way to greet your Papa?” the earl chided, stepping back from her and wandering farther into the room, standing to stare out at the gardens below through the window. “I’ve traveled all the way from London to see you. And this lovely estate. I must admit that when I first learned of your inheritance, I thought it was all some sort of trick. But you would have your own way and leave the loving bosom of your family no matter what I said. Now that I’m here, though, and see it in person, I must admit that it’s a lovely spot. And your chaperone, Lady Serena, is quite beautiful, isn’t she? A widow, I take it?”

His jaw clenched at the man’s mention of Serena, and Maitland thought perhaps it was time to announce himself. Daphne seemed not to realize he’d followed her in, and the earl was too busy waxing rhapsodic over the beauties of Beauchamp House.

“I don’t believe we’ve met, Forsyth,” he said forcefully, stepping up to stand side by side with Daphne. He gave a slight bow, perhaps not quite as deep as was warranted, but not caring. “The Duke of Maitland. I am a friend of your daughter’s, you might say.”

What he meant by that last, he could not say, but the man made every bit of protective instinct within him go on the alert. He was her father, but all the same Maitland knew that Daphne was no safer with him than she would have been with Sommersby if he still lived.

At the sound of the duke’s voice, Lord Forsyth turned with almost comical haste from the window and stared. For the barest flicker, he looked angry. Well, if he were upset at the knowledge that his daughter was not without friends, then he would simply have to swallow it. Because Maitland was damned if he’d leave her alone with the fellow.

“Duke,” Lord Forsyth said with a tilt of his head, “I am pleased to make your acquaintance. I was a friend of your father’s, and had little notion I’d be meeting you here. He was a good man, your father.”

His father had been nothing of the sort, but Maitland was hardly going to discuss it with Forsyth.

“I am here visiting my sister, Lady Serena,” Maitland said coolly, letting the other man know in tone rather than words that he had not appreciated the older man’s speculative words about her earlier. “And of course my cousin, Kerr. He only recently married another of the heiresses here, and resides here with her.”

Forsyth’s eyes narrowed at the implication that Daphne was well protected should her father wish to cause trouble. At least that was the message Maitland was endeavoring to send. And by the looks of it, Forsyth read him loud and clear.

“Capital, capital,” the earl said with false cheer. “A merry party you must all make here. I had no idea you were in such fine company here, Daphne. No notion at all.”

“Because we have not spoken since I left,” Daphne said, looking from her father to Maitland then back again, as if wondering what went on between them. “And now, father, I really must ask you to leave. I have a great deal of work to do and . . .”

“Don’t be absurd, Daphne,” her father said with a shake of his head. “I only just arrived. And there is something very important I must speak to you about.” He turned to Maitland with a raised brow. “I’m sure you’ll excuse us, Duke. I’m afraid what I need to tell my daughter is private family business.”

Maitland was opening his mouth to tell the man he would leave Daphne alone with him when hell froze over, when Daphne did it for him.

“Maitland stays,” she said, reaching out to grasp him by the arm. It was as much of a cry for help as he’d ever thought he’d see from her. Wordlessly, he slipped her arm into his, as if they were about to promenade round the room. He covered her hand with his, keenly aware of the thread of tension in her.

Once more, the earl’s eyes narrowed, and he turned an assessing gaze on Maitland, perhaps realizing for the first time the threat coming at him from that direction.

His jaw clenched, Forsyth said grimly, “Very well. If you wish your friend to witness our dirty linen, so be it.” As if needing to be in motion in order to speak, the earl began to pace the area between the window and the fireplace. “You know, Daphne, you left me without any obvious means of recouping what I lost from years of paying that tutor of yours, old man Sommersby.”

“You agreed to pay him,” Daphne said tightly. “After I threatened to expose . . .”

Hastily, Forsyth continued, “And I am currently in need of funds. As such, I must insist you return to London with me for the time being and meet a particular gentleman who has expressed interest in marrying you. Though his birth is not as high as yours, he’s quite wealthy and will make you a good husband, I trust. He’s assured me he has no concern about your odd ways, if you’re as beautiful as your portrait.”

Before Maitland could burst out with the string of invectives the other man’s pronouncement inspired in him, Daphne said, “I cannot marry this person. I’ve never even met him. You promised me that I would not have to marry someone for money as long as I won enough at the tables. I did so. You promised me, father.”

“I never actually promised, Daphne.” Forsyth said with a shake of his head. “If you chose to interpret it as such, that is not my fault. Now, go pack your things.”

Daphne’s hand on Maitland’s arm gripped him tightly. And before he even knew what he was doing, he said, “I’m afraid that’s impossible, Forsyth. Daphne is staying here.”

“I don’t know who you think you are, Maitland,” said the earl through clenched teeth, “but I am her father, and I am well within my rights to take her back to London. Now, kindly take your hands off of her and let her go pack.”

“It might once have been your right, Forsyth,” Maitland said coldly, “but Lady Daphne is my betrothed now and as such, she will remain here. With me.”

Copyright © 2017 by Manda Collins and reprinted by permission of St. Martin’s Press.

Manda Collins is the author of several books, including Ready Set Rogue and The Lords of Anarchy series. She spent her teen years wishing she’d been born a couple of centuries earlier, preferably in the English countryside. Time travel being what it is, she resigned herself to life with electricity and indoor plumbing, and read lots of books. When she’s not writing, she’s helping other people use books, as an academic librarian.