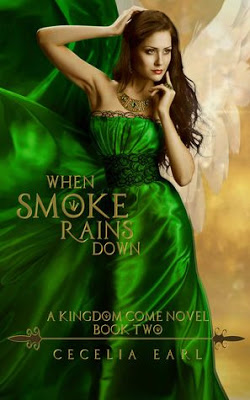 When Smoke Rains Down (Kingdom Come #2)
by Cecelia Earl
Genre: YA Paranormal
Release Date: May 31st 2017

In the aftermath of an explosion and Homecoming battle, Julia tries to form some semblance of a routine: work, study, visit her brother. Unable to confide in anyone about her double life of being both human and angel, and fearful she’ll bring death and destruction to those she loves, she pulls away from her family and best friend.

When demons once again start to show up at every turn, seemingly bringing about her brother’s deepening depression, she demands her sword from Nicholas. Ever the stern Guardian Angel, he forbids her from using it. Isolated, she takes protecting her brother into her own hands.

Thrust into a dark world of conspiring demons, Julia is in more danger than she ever imagined possible. To stop evil from spreading and overtaking those she loves, she’ll have to seek out the one person she mistrusts most.

Enter a complex world where humans, demons, and angels collide, all battling to rule the Earth. For readers who enjoy young adult paranormal romance and dark fantasy. Fans of City of Bones, Hush Hush, Unearthly, Halo, and Hidden Wings will be captivated by this unique take on angels and demons.

When Smoke Rains Down is Book Two in the Kingdom Come series. Book Three, the final installment, will be out Summer/Fall 2017.

“An AMAZING sequel that leaves me DYING for the next one!” ~ early reader of When Smoke Rains Down 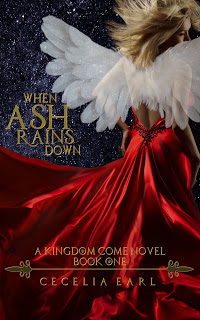 Being crowned homecoming queen and enduring a week at the center of her classmates’ attention is eighteen-year-old Julia White’s worst nightmare—even with Cole, her long-time crush, as her date. But when Julia is attacked by a green-blooded demon that vanishes in a plume of smoke, she comes face to face with what real nightmares look like—in the flesh, and all of the homecoming stuff hardly matters anymore.

As a frightening wave of crime infiltrates her small Wisconsin town, Julia tries to avoid Nicholas, a brooding, infuriating relative of Cole’s, who insists she’s the reason behind the corruption. He claims the culprits are demons who are after powers that only she—a human-angel hybrid—possesses. It’s unbelievable, of course, until he takes her to a hidden battlefield where warrior angels train to fight soul-siphoning demons—and her own angelic wings unfold.

When angels and demons draw battle lines, endangering everyone in their way, Julia has to find a way to protect them all, including herself. Because as it turns out, she’s the devil’s most powerful weapon against the angels, and he’ll stop at nothing to claim her.

The final battle between Heaven and Hell has begun.

When Ash Rains Down is the first book in debut author Cecelia Earl’s Kingdom Come series.

It has been a few weeks since I have read anything angel related on my blog and I have missed them!

When I talk about angels, we all know that we are back out usual heaven versus hell battle and I have really enjoyed this version of it.

Starting with When Ash Rains Down we get to meet Julia, her younger brother Noah and her mom as they are living in a small town trying to make a living.

Dad walked away and Julia is angry, can’t blame her and out the blue things start happening!!

Did I mention that Julia is Homecoming Queen and that there is your usual McHottie i.e Cole i.e the quarterback?

Again, I say strange things cause our girl is somewhat a loner (Mitch is er bestie to be fair) so how did she become Homecoming Queen?

As usual, I will likely let things slip but as you can guess from the blurbs above or me even mentioning angels, it comes as a surprise to no one that Julia is half-angel. Commonly they are referred to as Nephilim but for this series they are Hybrids and they fight on the side of the angels.

I am really glad we did not take the route of Nephilims, I mean Hybrids are abominations that need to be exterminate as the second set of stories usually go.

A lot is happening and we have some really good fights happening in both books.  Both also span about a good amount of time. You know what though, the writing is great, there is a really fantastic pace to the books and I read them back to back and could not put them down.

Now, you know that I am pretty much frustrated that I do not have book 3 that completes the series, however based on that I have seen the last book in the series will be out this fall and I am looking forward to it!!!

I really think Cecelia has done a really great job with the characters, especially Julia because she is not really human nor is she fully angelic either.. and that on top of what goes on with being a teenager.

I really liked her very much, and I loved how complex and multi-dimensional she is.  She is very relatable and I think someone to admire.

Her struggles with what is happening in her life are what makes her truly great and like I said I cannot wait to see what happens in book 3. 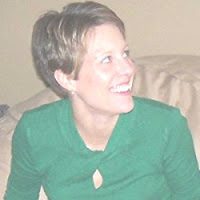 Cecelia Earl graduated with a degree in education and has been teaching ever since. She’s a wife, a mom of three boys, and an owner of a magical laundry pile that never stops growing. She lives near enough to Green Bay, WI that her refrigerator is always stocked with cheese, and the first colors her children learned were green and gold.

She’s a teacher by day, a mom always, and a writer in her sleep, but that’s okay because being an author is a dream come true. She writes angel books for young and youngish adults. If you feel young, she writes for you—whether or not you feel particularly angelic. Author Newsletter: http://eepurl.com/cdvvIj