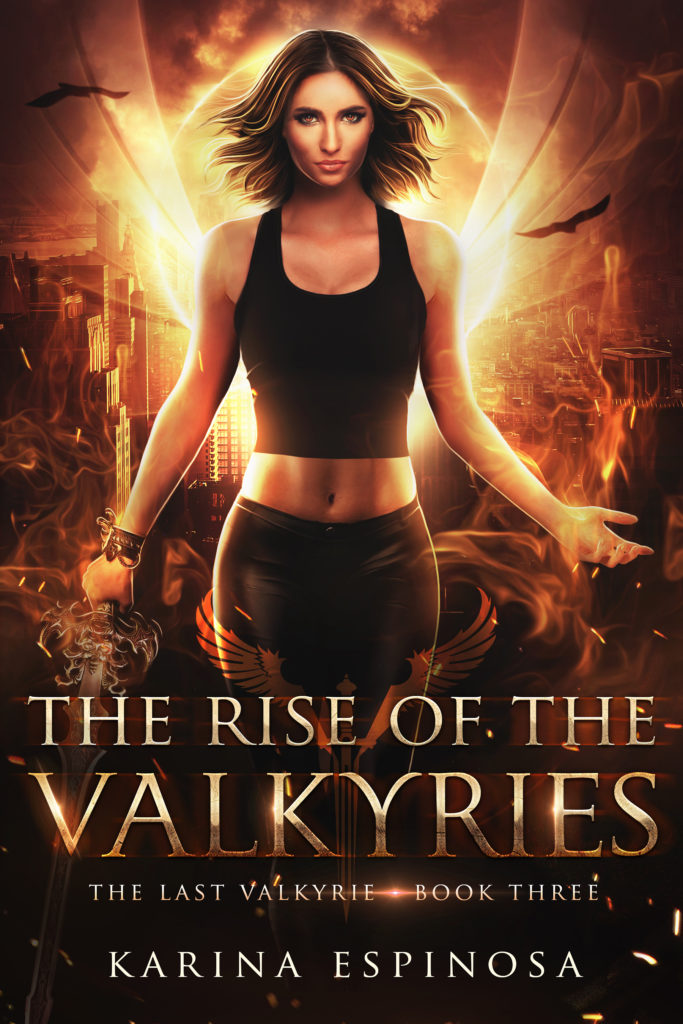 Raven Romero is willing to do whatever it takes to find her friends who were kidnapped by Hel—even if it means traveling to another realm for help.
Meanwhile, the battle to save Midgard is upon them and Raven is scrambling to build an army in time to defend it, finding allies in the most unlikeliest of places. But enemies are everywhere and not everyone can be trusted. Maybe not even the ones closest to her.
The end is near, and it’s time for The Rise of the Valkyries.

Here we have it guys, book 3 is finally here and just to break it to you early, it looks to me that it is the last one of the series. I say this, but Karina might create a new series with Raven and Fen and have them on a new set of adventures.

If you are wondering why I say that, well because I took my beloved “MacKenzie Grey: Origins” as a base example. I thought it was all over after Omega, but no Karina came with the follow up series “MacKenzie Grey: Trials” so maybe this will be replicated here as well. Just as an early FYI, the review for the most recent MacKenzie Grey: Trials book in the series called Bound by Magic will be coming soon.

I preferred to start with Raven on this one.

So let us focus on on The Rise of the Valkyries, and I am struggling here because a lot of things do happen and I do not want to reveal any spoilers.

Remember, you cannot read this book as a standalone, you will need to have started first with The Last Valkyrie and then The Sword of Souls before starting this baby.

If you have read them, then boy oh boy you are going to love it.  To be fully honest, I teared up at then end, I did not realize it at first so it came as a surprise to me as well. Shows you how much I was invested in the final outcome.

It is funny when I write this, because one of the characters introduced here is Thor and he has a bot of a role to play (Not that much of a spoiler, we are talking about Norse myth anyways…) but what made me laugh is that everyone he was on the pages, all I could see was Chris Hemsworth’s face applied to it.  It is amazing how pop culture influences us to such deep levels.

So, let me know once you start reading, are you like me putting Chris’s face on the character too?

Karina, did you do it on purpose? 😉

All that being said, if you have read Karina’s books before, then you know it is on par to the others with a great plot and outstanding story-telling! I want to discuss certain points, but that would mean major spoilers, let’s keep that in private then and not ruin it for others.

I pretty much how Raven has grown so much since the first book and I cannot help myself having a huge soft spot for Fen and I do hope I get to see them again together in the future.  It comes as no surprise what so ever that I VERY HIGHLY RECOMMEND The Rise of the Valkyries and I do hope you fall with Raven and Fen the same way I did and dive with them in this adventure.

Here you have it troops, since we are all to stay at home, it is a good idea to start reading. If this is your first time visiting, please go back from the start and get busy reading. No point going stir crazy when a good book can keep you sane.

Stay at home and stay safe everyone!