It is disappointing to see that Book 6 is delayed, not surprising but bloody well irritating.  Though I am not going to go on a rant after George R. R. Martin announced the delay on his Livejournal , I can promise you that I am seething on the inside!!!

I read the announcement on Buzzfeed yesterday and no surprise there when we see that some people are reacting pretty badly about it too. Buzzfeed published a new post about the mixed reactions today as well as a follow up. 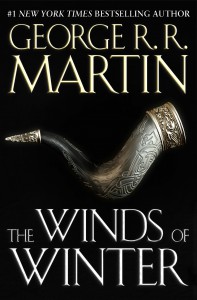 Though I understand that he wants the book to be great, my biggest worry remains that he is not young man. If we get a repeat of Stieg Larson’s unfinished 10 Volume Millennium Series interrupted mid book 4 due to his passing, I think I am going to lose it.

I did get The Girl in the Spider’s Web and started reading it, but stopped after the first chapter.  I forgot how heavy on the descriptive those books were, but I am going back soon and will update you with my quickie impressions.

In the meantime, back to Mr.. Martin who had no time to write but did make an appearance on Sharknado 3…  I am not going to say more, but you know what I am thinking and there is a part of me that enjoyed seeing him devoured for being so slow at writing.  (ok I did rant a little).

What do you think? Annoyed or don’t care?