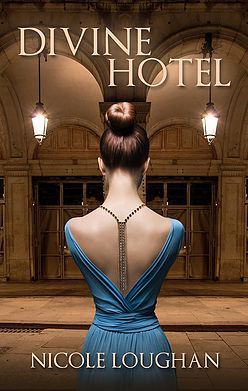 Time is running out for Philadelphia’s Divine Hotel…One woman is tasked with saving two children who lived at the once majestic hotel but she soon learns that there is more to their history and the hotel than she ever thought possible. To save them she’s going to have to re-set the clock for everybody at the hotel and the only way to do that is to go all the way back to 1964.

Righting the wrongs of the past will be no easy feat, because there are those willing to fight to keep their sins buried in history.

This is good, really really really good! yup 3 “reallys” were indeed very necessary.  I love time travel and I blame that to my love for the Back to the Future movies.  To be honest as I was nearing the end I was so so worried that it would stop on a big cliffhanger and that I would have to wait for a second book for the conclusion; I am so so grateful that it is not the case here.

Though it was a slow a slow start (to my taste), once we got into the plot I was hooked!  Oh yes!  We get to meet Sarah a social worker and Win a Lawyer though not really practicing as they get thrown into the past to right a wrong that has gone so bad and it needed fixing.  I loved the way how so many characters seemingly un-related or connected in any way actually were and it was done in such a smart way too.

You know my best friend and I used to have those massive convos about time travel and the consequences, we used to use BTTF as a primary example and the classic “if you could go back in time, would you kill Hitler?”, I always felt it is tricky well cause there is no way to escape cause/consequence and since time travel is more scientific it comes down to action and reaction. Based on Newton’s third law that I am sure you all know:

For every action, there is an equal and opposite reaction.

Now you are wondering why this has become a science post, well it is not but we cannot defy laws of physics plus I have a strong science background, so I tend to see things with these kinds of topics differently.  I could go on and on about my opinions in terms of going back to the past and making changes but that is not really the point here today.

However, if that ever was possible; I would rather go back and discreetly see the Pyramids be built, listen to Jesus preach (though I will not understand Arameic), or even go to Ancient Greece and visit Athens and Acropolis in all of it’s glory.

Though I am not a physicist, I really liked the way the ripple effects and the consequences of poor decision-making in the past by John were shown. Who is John you ask? Well he is pretty much the reason Sarah and Win go on their journey.

Since this is book one of a series, I am really forward to more and I am hoping that the next volumes will be as brilliantly drawn as Divine Hotel was/is.

I really loved Sarah’s character, she was so compassionate and sweet and so strong, cause what was happening was definitely not for the faint hearted.  I cannot wait to see her grow especially if the rest of the books of the series are going to cover what I am thinking of, but I cannot say since it would be a possible spoiler.

As I said, fantastic book, superb story, so do not hesitate to pick up as I am certain you are going to fall in love with it and the characters just as I did.

A long time ago, before most people can remember, a palace stood over Philadelphia. It was a place of refuge for the weak and weary of the city, a shining monument of marble, oak and brass that towered over the metropolis.

Good and evil were kept in balance there, until one day the scales tipped and evil won out. As the years passed, the marble and brass were stolen, and the oak was stripped of its shine. As the hotel fell into ruin, its inhabitants followed. All was not lost, though, for there was one chance to save the hotel—and its inhabitants—from this fate. Hidden not far away was an otherworldly gift meant to right the wrongs of the past, if only the right person could find it.

“You can’t catch me,” the boy shouted as he flung open the doors to the dilapidated dining hall. The room was lit by slivers of sun that peeked through the cracks in the high ceiling, and sporadic beams of light that shone through hastily fastened boards covering the room’s many broken windows.

All that was left of the once great hall were water-stained plaster ornaments positioned high up on the ceiling, far out of reach. Everything of value was gone. The light fixtures, hardwood floors, door knobs, and every last bit of shined marble and brass had been stripped away. The floors were an uneven terrain of warped wood and broken boards. The edges of the room were a tapestry of trash, but the center of the great space, which had once housed long oak dining tables, was completely bare.

The girl in pursuit walked gingerly over the broken boards. She kept her eyes on the ground and squinted to keep the dust floating through the air out of her eyes.

“Slow down, Darrius!” she shouted.

She paused in front of a hole in the floor, which blocked her passage into the great room. She stared down and saw only darkness, which could mean the hole opened only down to the next floor, or could possibly reach as far down as all ten floors.

“Come on, Carol,” he shouted. “You aren’t gonna fall going over that tiny hole.”

She watched him move with feline grace over the broken boards and gathered her courage. She involuntarily held her breath, took two steps back, and focused her eyes on a point just past the opening.

She ran as fast as her legs would carry her toward the gap. She pushed off and wobbled as a loose board slid away from her. She fell awkwardly forward and threw her arms out to catch herself. She scratched her palms reaching out for the ledge and only managed a precarious hold. If she’d weighed just a bit more she might have fallen in.

Darrius raced to her. The strain of holding on was too much for her, one by one her fingers were slipping, the pinkies first, then the ring fingers, and then all at once the rest gave way and she fell. Darrius grasped her wrist just before she slipped out of sight. He grunted as he pulled her up and out of the hole. As soon as he had her over the edge he fell backwards and she landed beside him with a thud.

Carol lay back and caught her breath as Darrius joked, “I could’ve made that jump with you on my back, you chicken.”

She stared up at the ceiling and pointed at a plaster fruit basket. “Darrius, look, the ceiling. It’s changed again.”

He looked up and said, “I don’t see anything different. You always think that ceiling looks different. Who do you think would get all the way up there and fix the ceiling?”

“It does change,” she exclaimed. “It always looks like it’s about to fall apart, then it’s patched back up. Yesterday that fruit basket was just a hole in the ceiling.”

He laughed so hard the ground shook beneath him. When he stopped he realized the floor was shaking without any work from him, and he bolted upright.

“What is that?” Carol demanded, as she jumped up and looked down at the floor.

“It’s somebody pounding,” Darrius yelled as he, too, jumped up to his feet.

More knocks rang out around the hall, shaking up dust, which floated freely through the room. Suddenly a shout could be heard below their feet. “Keep it down,” followed by a more distant yell, “Shut up.”

When the pounding ceased they could hear the wail of sirens outside. Darrius jumped up and ran to peek through the boards. 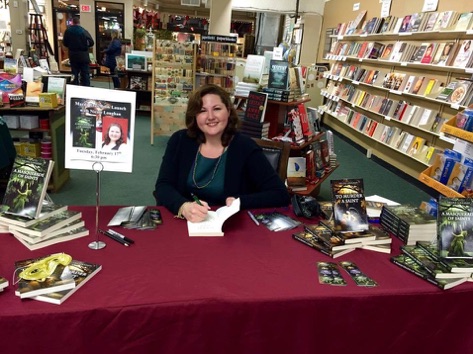 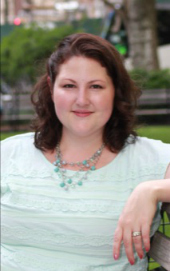 You may know Nicole as the syndicated humor columnist, “The Starter Mom,” or from her Best-Selling Saints Mystery Novels. Because of the series’ popularity, Amazon chose it for their Stipend Program to be turned into an audiobook at their expense.

An award-winning journalist and author, she was recognized by Writer’s Digest as a top fiction writer in 2015 and won honorable mention in genre fiction from the Writer’s Digest annual self-publishing competition for her Saints Mystery Series.

Nicole writes for two daily newspapers in the greater Philadelphia area and as a columnist for Happenings Media. Prior to working as a writer, Nicole was an Agency Social Worker for the Philadelphia Department of Human Services, where she first learned about the subject of her latest novel, Divine Hotel.

Nicole grew up on a rural farm in Southern Michigan, but she was always a city girl at heart. She still has a penchant for straight-from-the-dairy cheese, but otherwise prefers to spend her days in New York and Philadelphia and her adopted hometown in Bucks County. The mother of two, she is a soprano in The Bucks County Woman’s Chorus and an amateur pianist. 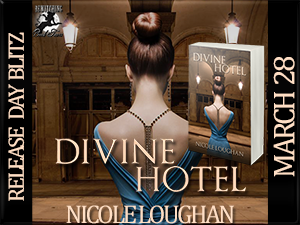