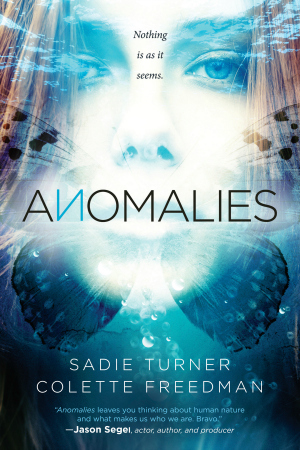 Keeva Tee just turned fifteen. All of her dreams are about to come true. She s about to make the trip to Monarch Camp to be imprinted with her intended life partner. One day they’ll have perfect kids and a perfect life. But in her happy, carefree life in the Ocean Community, something weighs on her mind. She hears whispers about anomalies citizens who can t be imprinted. No one knows what happens to them, but they never seem to come back.

When Keeva arrives at Monarch Camp, her worst nightmare becomes a reality she is an anomaly. After imprinting, the people she loves change, and she starts to doubt everything she s ever believed. What if freedom and individuality have been sacrificed for security? And what if the man who solves all the problems is the very man who s created them and what if he isn’t a man at all?

When Keeva finds a warning carved under a bunk bed she begins to understand: nonconformity will be punished, dissent is not an option, insurgents will be destroyed.

I love Dystopian novels my favorites being The Hunger Games and The Divergent Series, so when I read the blurb of Anomalies as it was offered for review, I could not resist the appeal.

When I first started reading the book my mind early on associated with some similarities with The Divergent Series but it was just only a fraction of of the story.  But to be honest, I read it in one go and in under 3 hours which ought to tell you all that I could not put it down to save my life.

I loved the combination of the Dystopian universe meeting some pretty good sci fi in this pretty original book.  The characters were great especially Keeva and Calix, where you can see two people going through somewhat similar yet opposing journeys into a world they never imagined.

I liked that Keeva from the get go as a small child had really good instinct on her and you can see her growing and noticing very quickly what is going on around her whereas her best friends are totally oblivious and get brainwashed in so easily.  Keeva is out there with Katniss and Tris in the strong female hero type of this genre.  Katniss being special to me, I would say that Keeva would give Tris a run for her money.

It books like these that sometimes give me pause where I start asking myself a whole lot of questions and it always comes down to when we are going to mess up so badly and blow ourselves up into oblivion.  Dystopian futures such as the work Keeva lives in is not pretty but our current one is sadly no better.

Overall, the pace is fantastic, the style pretty much flawless, we have the mommy of all bad guys, and here I thought President Snow was evil, but nooo we got an even better one here! I cannot wait to read how his bootay is going to get kicked into the next millennium!!  But now that I think about it who is going to kick his ass? Keeva or Calix or both?

Ok, gosh that means we need to have the next book in the series and I am wondering when that will be?  Do we already know?

Fantastically impressive first book of a series with unforgettable characters, they are out of this world!  So if you are into Dystopian universes, you are going to love Anomalies and if you have never bothered with one, then this is a really fab place to start.

Turner and Freedman masterfully create a futuristic world where lives are carefully planned out. Individuals are paired at the age of five with their intended. Then at 15, they are reunited, given careers, and sent out to an assigned community. On the surface there appears to be no war, disease, or famine. Beneath the carefree civility lie secrets that the ruling Global Governance will kill to keep. Unknowingly caught up in a covert war, 15-year-old Keeva goes to Monarch Camp expecting to be imprinted with her life partner. When she arrives, she finds that her intended has died and Keeva is now an anomaly: a citizen who has no partner. Without the imprinting process to control her, Keeva more openly questions a society that she has always found sophistic. Who took her baby sister all those years ago? What does the Governance want with the anomalies? When will the resistance strike, and how does she fit into the plan? As Keeva uncovers answers, she has to discover who she truly is before more lives are lost and nightmares become reality. A lively story with plenty of appeal for reluctant readers, this work ends in an abrupt, unresolved conclusion. There is no doubt that a sequel is on its way. VERDICT A general purchase for libraries where Ally Condie’s “Matched” (Dutton) or Veronica Roth’s “Divergent” series (HarperCollins) are popular.

“This book makes spirituality exciting and vibrant. I predict it will be so successful that we’ll all have to learn how to pronounce ‘anomaly’ correctly.

“Anomalies leaves you thinking about human nature and what makes us who we are. Bravo.”

“[Anomalies is] a fast-paced story which champions individuality and truth. Keeva is a compelling heroine who is relatable and strong.”

“A compelling read which confirms we must fight for what makes us each special and unique.”

“We get to see this unusual futuristic world through Keeva’s smart and unapologetic eyes. A whirlwind adventure with deep meaning, [Anomalies features] smart writing, engaging characters, and a plot which leaves you hanging onto every word.”

SADIE TURNER is a Los Angeles-based producer and writer originally from Brighton, England, who works in business development with several Hollywood entrepreneurs. She has various projects in development, and also teaches yoga.

COLETTE FREEDMAN– An internationally produced playwright with over 25 produced plays, Colette was voted “One of 50 to Watch” by The Dramatist’s Guild. Her hit musicalSerial Killer Barbie can be heard here.

Her play Sister Cities was the hit of the 2008 Edinburgh Fringe and earned five star reviews:  It has been produced around the country and internationally, fifteen times including Paris (Une Ville, Une Soeur), Rome (Le Quattro Sorelle) and Australia.  It is next up in  Chicago August 2016. She wrote the film which is currently in post-production and stars Jacki Weaver, Alfred Molina, Jess Weixler, Stana Katic, Michelle Trachtenberg, Amy Smart, Troian Bellisario, Tom Everett Scott and Kathy Baker. She  has co-written, with International bestselling novelist Jackie Collins, the play Jackie Collins Hollywood Lies, which is gearing up for a National Tour.

In collaboration with The New York Times best selling author Michael Scott,  she wrote the thriller The Thirteen Hallows  (Tor/Macmillan). Her novel The Affair (Kensington) came out January 29, 2013. The play of the novel earned both critical and commercial success as it toured Italy February through May 2013. Her sequel novel The Consequences(Kensington) came out January 28, 2014. Her YA novel Anomalies (Select Books) came out February 9, 2016. She also co-wrote the film And Then There Was Eve  which is currently in pre-production and begins principal photography May 2016.