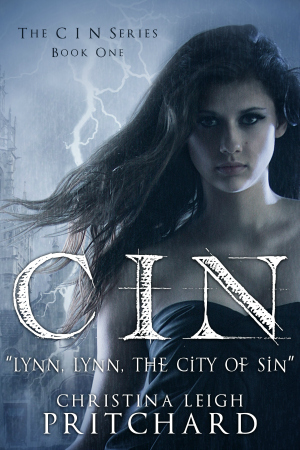 Seventeen year old Lisa Brown’s life is falling apart. First, her mother and father divorce, then their house forecloses and now, her mother has decided to commit herself to a psychiatric hospital.

If that weren’t enough, she must leave sunny south Florida to attend a boarding school full of geniuses in cold, Lynn, Massachusetts. The city where the locals chant “Lynn, Lynn, city of sin; you never come out the way you went in.”

And, they aren’t kidding. Lisa must live in a tiny shack with two strange teenagers, a dog named Pig who growls when you look at him and a cat named Rat. “Mind the cat,” everyone says. What the heck is wrong with this place?

Lisa thinks she’s landed in her own house of horrors with the anti-social Alex and his facetious sister Ally. But, the real drama begins the day she is struck by lightning…

C I N was a really nice unexpected surprise if I really think about it.  Very different from where I expected it to go so just for that, we have two thumbs up for originality.

Let’s start from the beginning shall we?  So Lisa’s life is kind of sucky at the moment as her mom is shipping her off to an aunt living in a city called Lynn (with an odd saying attached to it) she has never met and checking herself to a mental hospital.  This does not bode well in terms of good starts.

From the get go, you really get to feel for Lisa as she is completely thrown, having no idea what is going on and finding herself stuck with strangers living with them and they are really not the nicest and most welcoming bunch.  Lisa moves in with twins Alex and Ally and let’s just say that those two are a bit of odd duckies.

As we move in deeper within the book, we get to get glimpses into Ally and Alex and I think the possible original dislike I had for them gets erased little by little as events unfold.

However, all things change as Lisa’s mom comes to get her out of the blue and well she pretty much hit by lightning.  Not wanting to give you too many spoilers, we can safely say that the story unfolds from there.  And no, I am not saying more you will just have to read the book to know.

There is one thing that I felt reading is that the pace and rhythm of the book matched the mindset of Lisa, I could be crazy but this is how I felt as I was reading.  It was slower at first and then it really picked up in terms of flow and all the way to the end.

In terms of characters, I really liked a lot Lisa, Ally and Alex. You get to have good insight into them even when some behaviours of Ally especially do not make sense at all until well you actually realise why.  Ally and Alex are actually quite complex in comparison to Lisa as you know from the get go what is going on with her and the others are definitely more mysterious in that regards.

I really found the storyline to be refreshingly unexpected, though I did start piecing some things together and had a couple of “I knew it!!” moments.  It was a really quick read as it is a short story and I found that book 2 is already out.  I did not have the chance to read it as I am otherwise committed, but as soon as I can, I will make sure to update you guys and review it for you.

Based on that alone, I cannot say if this is a trilogy or longer, but only time will tell.  In the meantime, that was a really cool clever story and that I am looking forward to reading book two.

If you have read it, I would love to hear more from you guys!