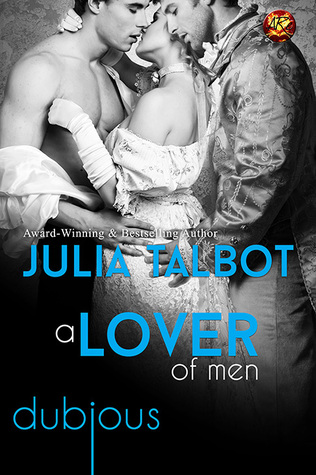 A former soldier, a spy, and a spinster…three people, three lovers.

For spinster Lelia August, first came the small fortune then came the hoard of unscrupulous characters wanting a piece of it—or more specifically, a piece of her.

She decides to find a suitable man to marry, someone who won’t want her to submit to the marriage bed. She settles on ex-soldier Phineas Moore, who has a reputation as a lover of men.

Phineas is intrigued by Lelia’s offer and thinks a marriage of convenience might just work for them. But when someone tries to kill his future wife, Phineas vows to protect her and find who’s responsible. He hires the irresistible spy Rafe Gaudi to investigate, and soon realizes he’s outsmarted himself.

Can Rafe and Phineas figure out who’s plotting against the woman they’ve come to love, and can they even hope to dream of a future where the three can become one?

It seems that today is short stories day and here is my second one. This is a new one for me as I never read a menage before.  So YAY for new discoveries and A Lover of Men was a nice and quick read.

Phineas is the centre of it all, at least that is how I saw it and he was an interesting character with a heavy back story.  So what do we have? We have a spinster, a spy, some bad guys and people falling in love in the middle of it all.

Like I said, this is pretty much a short story, it goes really quickly and in a way there was room for so much more in the book and no I am not talking about sexy time.  IMHO there was a lot of room there to play with considering it was set in the Regency era, but the shortness is not truly detrimental to the story.  I would have loved more, and I was perfectly content with what I got.

So if you want something hot and steamy to be a quick distraction for an hour or so, this is the book for you!

Now, I am really curious to check out Julia’s other books and go from there…

“I have a business matter to discuss with you, Sir Phineas.” Lelia August studied the man who sat across from her, his large body stuffed into the tiny black lacquer chair stationed across from her desk. Somehow he should have appeared quite as ridiculous as all of the recent suitors who had wiggled their way into her library intent upon sweeping her, and her fortune, off her feet.

Contrarily, Phineas Moore appeared perfectly at ease, masculine, even somewhat predatory. His hair, black as a rook, was cut ruthlessly short, and his neckcloth was simple and unfashionable.

Had Lelia not done her research she would have thought him the simple country baronet he appeared. Instead, she knew his unfashionable appearance hid a complex man with a soldier’s mind and a surprising reputation among his peers.

“I confess I am curious, Miss August. That is why I find myself here, answering your summons.” His green eyes gleamed when he smiled slightly, lines around his eyes and mouth crinkling.

“I am glad you have that to satisfy. Makes you far more interesting. Tell me, what have you been able to discover about me in the last six hours?” She had sent her invitation to him at eight, which meant he would have received it around nine. He had arrived at five until three. She approved of his promptness.

“That you are a spinster. That your father was the third son of an Earl. That your uncle passed away leaving the title to a cousin who has a great fondness for you, and he’s settled upon you a stipend of some considerable wealth. In a trust, so it cannot be siphoned off by his miserable, whoring, gaming brother.” His expression never changed during the telling, but he did study her closely.

Gracious, she was outclassed here. Lelia curled her hands together, keeping them from fluttering like nervous birds. No sense giving away her sudden nerves.

“That’s quite a lot,” she said. “If you know all that about me, then you know that since I have come into said fortune I have been deluged with suitors.” All shapes, sizes, and classes of men had been calling, so much so that she’d taken the knocker from the door of the modest townhouse her cousin had also settled upon her. He liked her company, he said, and preferred she stayed in Town. Dear Eustace. Still, some of the men had been rather more forceful in their attentions than she felt necessary.

“Indeed.” Sir Phineas tilted his head. “I imagine your cousin hopes settling a fortune on you will erase your spinster status.”

“Hmm.” She wasn’t sure at all that had been Eustace’s intention. However, now he saw her difficulty, he had turned his eye toward that idea, if only to give her relief. Having just gained her independence from reliance on men, Lelia had no desire to go back. “Hence my proposal to you.”

“I am on pins and needles,” Phineas murmured.

“Yes. Well.” She squeezed her hands together so hard her knuckles turned white. “I realize we do not know one another, but you must realize, I have viewed my situation from every angle and I believe this is the best possible solution to my dilemma.”

“I see.” Phineas sat back, the chair creaking alarmingly. “By all means, enlighten me, Miss August.”

“I want you to marry me.” The nausea left her as soon as she said it. Better to have it right out in the open.

The chair cracked, the two pieces of it falling away to either side while Sir Phineas crashed to the floor. His well-polished boots kicked the air for a moment before he sprang to his feet. “I beg your pardon?”

“I said, I wish to propose marriage. To you.”

Shock overtook his expression, and Phineas placed his hands on her desk, leaning into her space. This close she could smell the deep scent of tobacco and freshly pressed linen. “Why?”

Julia Talbot lives in the great Southwest, where there is hot and cold running rodeo, cowboys, and everything from meat and potatoes to the best Tex-Mex.

A full time author, Julia has been published by Samhain Publishing, Dreamspinner Press, All Romance eBooks and Changeling Press. She believes in stories that leave a mark, and that everyone deserves a happy ending, so she writes about love without limits, where boys love boys, girls love girls, and boys and girls get together to get wild, especially when her crazy paranormal characters are involved. 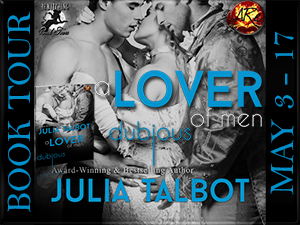