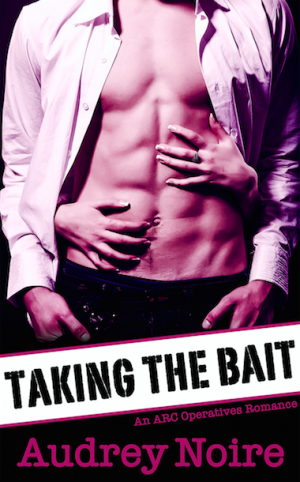 Daria Griffin is a newly-minted undercover operative with ARC, on a mission with her partner. Nicolai Novik an augmented human with super-fast speed. Their first job? Infiltrate a conference of billionaires as a newly-wed couple and dig up the dirt on shady business dealings.

Daria’s the bait, tasked with luring in businessmen with her unhappy-trophy-wife routine while Nicolai talks shop. But the operation goes all wrong when Nicolai starts acting strangely in the middle of it. Will they be discovered by forces who may not have their best interests at heart? And why is Nicolai acting so possessive of Daria when he never said more than a few words to her during training?

Part one of a three-part romance story in The ARC Operatives series!

Author’s Note: Taking the Bait is a 12,000-word novella. No cliffhanger, HFN ending. Due to strong language and sexual content, this book is not intended for readers under the age of 18. The first scene from it’s sequel is included as a bonus at the end of the book!

I am going to keep this one really short and sweet as the novella is just about 30 pages long.  We meet Daria and Nicolai on their first undercover mission where Daria is still fresh out of training and Nicolai is physically enhanced (Kinda like Steve Austin!)

I really cannot tell you much plot wise, but this book was really sexy, and I am guessing this is the introduction to a new series of books with both Daria and Nicolai on a series of different missions as well as the exploration of newly discovered feelings for each other.

Taking the Bait was definitely a super quick read and quite raunchy, so all good on that end!  You will not get any complaints from me on that end, plus the cover is HOT!

So ladies, if you want a good time, there you go!

“You want my first mission to have me pretending to be what?!” Daria Griffin gripped the side of her chair as she stared at her boss, and then looked back down at the dossier open in front of her on the desk. She wrinkled up her nose and tried not to make a noise of distress as she wondered if she was really ready for something that required that level of acting skill. Daria had never been particularly confident in her own appearance on a good day, let alone having to pretend to be a trophy wife while undercover (although damn had she day-dreamed of being swept off her feet by billionaire-du-jour when reading those frequent eligible bachelor articles). She shot a look over at her future-partner.

Nicolai Novik’s expression was deadpan, unreadable, and a little unnerving. He was eyeing up his dossier, gaze flicking back and forth over the paper and profiles within it. He ran a hand through his dirty-blond hair and sighed, long and low. At least because English was his second language he wasn’t super-fast at reading it, since he was super-fast at pretty much everything else (including getting into the pants of the receptionists and assistants that were running all over ARC’s offices, holy wow had he burnt through ladies like Daria’d gone through funny-shaped erasers in elementary school).

There was nothing like a team made up of a nearly-dead-half-recovered ARC operative and a nameless ARC former-intern to do an undercover mission at a billionaire business convention, right? At least, Daria hoped there would be nothing like them and they wouldn’t fail and go down in a hail of bullets. Even over a year of training to be an undercover operative hadn’t exactly boosted her self-confidence, especially since in quite a few of her courses she’d only passed with middling grades.

She thought back to before she’d begun down the path towards super-secret spy work. Her supervisors had plucked her out of her internship in the labs as the ink was still drying on her degree. She’d been hustled off (‘transferred’ was the official word for it) from her tiny job paper-chasing after a kind but generally hapless bio-engineering scientist named Dr. Robert Fowler, and put through a series of rigorous tests designed to ‘assess her skills and talents’.

During the testing process there’d been no coffee-fetching test, and definitely no pop-quiz on how to scoop up great thrift-store finds. Daria had figured she’d failed miserably and would have to do the workplace walk-of-shame back to her old boss down in Lab #3b, continue her internship and hope for a good letter of recommendation from him. Not that she would have minded… Robert had been the laid-back kinda boss-guy, and she’d liked working with him even if the hours were kinda wonky.

To her great surprise though she’d passed the tests she’d been given. When she’d looked down at her acceptance and new employment contract with astonishment, Anastasia Rykov, the operative administering the majority of the testing had just raised one perfectly groomed eyebrow and said,

“What, you think ARC picks fools for interns? You were groomed for this from the start.”

Audrey Noire grew up in the pacific north west, climbing trees and swimming in the sea. She spent her formative young adult years travelling the globe alongside her musician husband as he toured and played across Europe, North America, and parts of Asia.

They’ve settled down (sorta kinda) with a bundle of cats in a sea-side town. When she’s not on the road watching her rocker husband from side-stage, she’s writing about handsome gents and lovely ladies falling for one another.

She believes that every day is ripe with possibilities, and that life is precious. Don’t waste a second – fall in love with your life all over again!