I love Dystopian novels, they are dark and gloomy and yet in the middle of all that darkness there is the one that shines and brings in change.  Dissolution is really great and a wonderful representative of the genre. 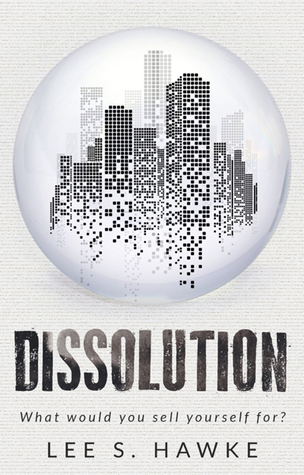 Madeline our main character has spent her life training and preparing for the day she would be eligible to put herself up for auction.  She has an interest in science and engineering and wants nothing more than to escape from Anron Life Limited (the company she belongs to as a human lab rat) and be purchased by another called Merce that is more technology oriented.

This is the part that left me a tad confused, though maybe confused is not the word. I think I was having a little hard time with the logic.  Let me explain, People are owned by a handful of selected corporations. When people marry and have kids, the kids belong to the company until the auction when they are 18.  So if companies owns the people, how can the people sell themselves since they do not own their own lives.  Maybe I misread or missed the explanation all together, but that really bugged me.

There is another part that left me a tad baffled as well, Madeline has a bf and she has to pay for dates? This makes me think that I may need to be reading the book yet again.

So back to the book…

Maddie finds herself still standing after all of the others have been auctioned off and she’s told that she’s not on the list, life and plans as she knows it has changed.  let’s just say that her life is pretty much in danger now.

Dissolution is a short read that you can see touches of other dystopian novels such as Divergent.  I mention Divergent specifically because the Corporations were very reminiscent to me of Divergent’s faction system.

I think there are a lot of areas that need filling and more back stories explaining a bit more that very odd social order, there is a lot of room for it to fill in important detail for sure.  However, that left me wanting to know more; which is  good.  Actually, I do not know if the novel is complete with one volume or if there is a follow up.

I believe that the idea was actually quite great and we have room to grow and expand.  The potential is there and now I am awaiting anxiously what Lee will do next.