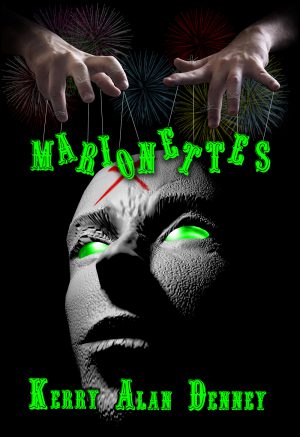 Resuscitated after he drowns and dies in a flood, David Flint discovers he has returned from the other side with an uncanny ability: He can “jump” into people’s bodies and minds, and control their thoughts and actions.

David believes it’s a gift, and wants to use it to help people. Then four members of a ruthless drug ring savagely attack his fiancée and leave her in a coma, and David tries to use his new power to destroy the whole ring. But the ringleader, a voodoo priest known as the Zombie Master, is a formidable man with a deadly secret: He has the same incredible ability as David.

When the two human marionette masters clash in a brutal bloody showdown, using the ring’s members as their puppets, David discovers he’s battling for much more than his life—he’s fighting to rid the world of an evil human abomination.

Marionettes illuminates the greatest achievements of the human spirit and the darkest corridors of our minds, and answers the age-old question: What are the consequences of absolute power?

In the first “dream” I was a plump black woman striding down a hospital corridor, joyfully belting out a gospel tune. Although I’d never heard it before, I knew all the lyrics and melodies. This was odd, for though I was a luthier by trade, I could barely carry a tune in a bucket. My specialty was wood and strings, so it was a joy to hear “my” mellifluous voice ring out in the hospital hallway.

“Hi, Danielle,” an attractive nurse greeted me as I passed her.

“Hey, Julia,” I said, returning to the tune without losing rhythm.

How did I know who Julia was? I looked down at my feet, clad in regulation white shoes, and heard the swish of my green scrubs as my thick thighs rubbed them together.

“Trippy” didn’t come close to defining the moment. It was as real as anything I ever felt or knew.

I’m a thirty-five-year-old white man, not a fifty-something stout black female nurse with enormous breasts. And yet I was, now. I was intimately familiar with “my” body, and suddenly knowledgeable about medical terminology and equipment.

I/Danielle turned and entered a patient’s room, still singing about Jesus. I knew it was grumpy old Mr. Dayton’s room, but was clueless as to how I knew that. I also knew Mr. Dayton suffered from cirrhosis and hepatitis because he couldn’t stay off the sauce, and though they were only words denoting diseases to David Flint the guitar and violin maker, the “me” that was Danielle knew exactly what they meant.

“We don’t serve alcohol in this hospital, Mr. Dayton.”

“Wanna go home. Shouldn’t have to be here.”

“You know you have to have that surgery, Mr. D,” I said, and clucked my tongue, which is something I would never do.

“Drinking is what put you here in the first place.”

This was too much for me, too real to be a dream. Mr. Dayton reminded me too much of my father, after Mother died.

I wanted out of the dream, and just like that, as if my wish precipitated it, I woke in my hospital bed, head pounding and throat on fire. For a while there was pain, my dependable old friend, but this was pain of the body and mind, not of the heart and spirit. I struggled again for the memory of what happened to me, but the harder I strained for it, the darker and more forbidding the encroaching waters became.

Unable to find the elusive memory, I turned what was left of my mind to trying to discern which was the dream and which was reality—if, in fact, there was any reality for me anymore. The blend became even more confusing when the pretty angel/nurse visited me again.

“Try to turn your head face up, David, so I can give you some ice chips,” she said. 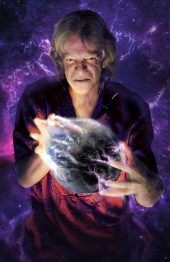 Colleagues and readers have dubbed Kerry Alan Denney The Reality Bender. The multiple award-winning author of the paranormal thrillers Dreamweavers (Juju Mojo Publications, August 2015) and Soulsnatcher (Juju Mojo Publications, April 2014), the post-apocalyptic sci-fi/ horror thriller Jagannath (Permuted Press, February 2015), and numerous short stories published online and in anthologies, Kerry blends elements of the supernatural, paranormal, sci-fi, fantasy, and horror in his work: speculative fiction at its wildest and craziest. With joy, malicious glee, and a touch of madness, he writes reality-bending thrillers, even when the voices don’t compel him to. His protagonists are his children, and he loves them as dearly as he despises his antagonists… even when he has to kill them.

Kerry lives in Stone Mountain, Georgia with his golden retriever Holly Jolly, a veteran professional Therapy Dog, where he is currently writing his next supernatural thriller… and deciding who to kill in it.

Be on the lookout for Kerry’s new post-apocalyptic/ paranormal thriller A Mighty Rolling Thunder, coming December 3, 2016 from Burning Willow Press.