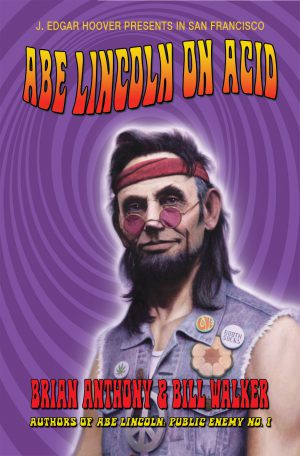 There are whispers even now that Abraham Lincoln never really died, that a voodoo spell cursed him with a terrible eternal life. It has even been claimed that he robbed banks in the 1930s with John Dillinger, only to mysteriously disappear once again into the pages of history. But the truth is even stranger than the rumors…

Watched over by a vengeful J. Edgar Hoover and held in a secret location near his old Springfield home, Lincoln re-awakens in the 1960s, and finds himself thrust into an era even more turbulent than the Depression, a time where a divisive war is once again tearing a nation apart and political intrigue and assassinations are rampant.

Escaping Hoover’s clutches with a clever bit of deception, he navigates an even more treacherous and unfamiliar terrain, finding an ally in John Voci, a young San Francisco folk-singer. Together they journey across a counter-cultural landscape, meeting those who believe a great man has returned, and striving to remain free from those who want to bury him once and for all.

Will Lincoln inspire the younger generation and save his country from its final reckoning, or will he turn on, tune in, and drop out?

BRIAN ANTHONY is a writer and award-winning filmmaker. His first feature film, Victor’s Big Score, was praised by Variety as a “Tremendous calling card for writer-producer-director Brian Anthony” As a writer-producer Anthony has contributed to shows for American Movie Classics, Arts and Entertainment and Fox Syndication, including Beneath the Planet of the Apes and Lost in Space Forever. A veteran film historian, Anthony has been interviewed on network television regarding film history, and co-authored the acclaimed biography of film comedian Charley Chase, Smile When the Raindrops Fall, in 1998. Brian is an expert art and book restorationist, and you can see his work at Anthony Restorations.

BILL WALKER is an award-winning writer whose works include novels, short stories and screenplays. His first novel, Titanic 2012, was enthusiastically received by readers, and Bill’s two short story collections, Five-Minute Frights and Five-Minute Chillers, are perennial Halloween favorites. A highly-respected graphic designer, Walker has worked on books by such luminaries as Ray Bradbury, Richard Matheson, Dean Koontz and Stephen King. His most recent novel, Abe Lincoln: Public Enemy No. 1 was published in 2013.