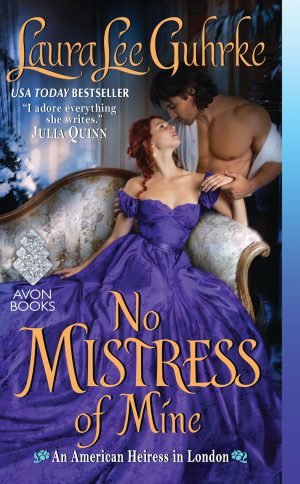 No Mistress of Mine
Laura Lee Guhrke
Genre: Romance

After spending his youth as one of the wildest rakes in the ton, Lord Denys Somerton has devoted the past six years to putting his past behind him. He is determined to fulfill his duties, find a suitable wife, and start a family, but that plan changes when Lola Valentine—the red-haired temptress from his past—returns to London, sparking the same irresistible desires that almost ruined his life once before.

Lola is a woman with no romantic illusions. She knew love would never be enough for a British lord and an American girl from the wrong side of the tracks. For Denys’s sake, she walked away from him and the glittering life he offered. But when an unexpected inheritance brings her back to London, Lola discovers the passion between them is as hot as ever. Can they vanquish it, or will it burn out of control again and destroy them both?

This emphatic oath on the part of Earl Conyers was startling enough to catch the attention of all the mem- bers of his family. The earl, as they well knew, was not a man given to profanities, particularly this early in the day.

All of them paused, knives and forks poised, but their attention seemed to go unnoticed. Conyers continued to stare at the letter in his hand and did not explain what news within its pages had caused this sudden in- clination to swear at breakfast.

His son, Denys, was the first to break the silence. “Father, what is it? What’s happened?”

Conyers looked up, and his expression told Denys the news was every bit as shocking as his outburst had implied.

He waited, but when his father folded up the letter, tucked it back into its envelope, and placed it in the pocket of his jacket with a glance toward the ladies, Denys concluded there was a need for discretion and returned his attention to his breakfast.

“Do you have plans for luncheon?” his mother asked, and when he looked up, he found her watching him with a look he knew quite well. “I’m meeting Georgi- ana and her mother, so we can discuss the flower show. We’ll be dining at Rules, which is close to your offices. Would you care to join us?”

“Well, I am your mother.” Lady Conyers gave a sniff. “Mothers are allowed to do that.”

“Where is that rule written? I should like to look it up.”

“Don’t be impudent, Denys. And if I were match- making, it’s not as if I’ve no cause. I saw you dance with Georgiana at the Montcrieffe ball. Two waltzes,” she added with obvious relish.

“True.” He gave a heavy sigh of mock suffering. “Given that, I suppose I’ve no right to complain.”

“If you don’t want to go, Denys . . .” Her voice trailed off as she looked at him in hopeful inquiry.

He thought of Georgiana, and an agreeable fondness settled over him. “On the contrary,” he said. “I should be delighted.”

“Oh, I’m so glad!” The moment those words were out of her mouth, she bit her lip and looked away, as if fearing her effusiveness was a step too far. “Georgiana is a dear child.”

From her place beside their mother Denys’s sister, Susan, gave an exasperated sigh.
“Really, Mother! Georgiana Prescott is hardly a child. She’s twenty- eight, the same age I am. Though I daresay she seems older.”

“She’s more mature, at any rate,” Denys put in, giving his irrepressible sister a meaningful glance.

“Either way, she’s a dear child to me.” Lady Conyers leaned closer to her daughter. 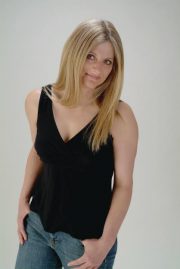 Laura Lee Guhrke spent seven years in advertising, had a successful catering business, and managed a construction company before she decided writing novels was more fun. A New York Times and USA Today bestselling author, Laura has penned over twenty historical romances. Her books have received many award nominations, and she is the recipient of romance fiction’s highest honor: the Romance Writers of America RITA Award. She lives in the Northwest with her husband (or, as she calls him, her very own romance hero), along with two diva cats and a Golden Retriever happy to be their slave. Laura loves hearing from readers, and you can contact her via her website: www.lauraleeguhrke.com