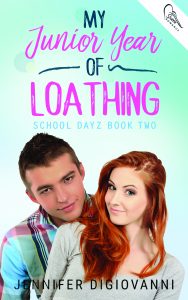 Junior year is supposed to be tough. Exams, term papers, homework, college tours, and participation in extra-curricular activities can all add up to non-stop stress. But Melinda Banner has goals to achieve and dreams to make real. This year, she’ll be unstoppable. But even over achievers need a break.

While walking in the woods to take a break from the stress of it all, Melinda meets a boy named Connor. After a few more run-ins, the two settle into an uneasy friendship, if you can even call it that.

But Connor’s closed and mysterious. Whenever Melinda asks too many questions, he suddenly has to go or is no longer interested in talking. When they’re together, she’s torn between wanting him to open up and running away as fast as she can. Still she can’t seem to shake her budding interest in him.

Connor has his own way of looking at the world, and his views often conflict with Melinda’s practical nature. Can you like someone and loathe them at the same time? Is he even worth the emotional tug on her heartstrings or distraction from all things Junior year?

And, as if she needs another project right now, Melinda starts to obsess over the abandoned estate she passes on the way to school each day. Between Connor and the old estate, Melinda’s beginning to think she’s taking on too much.

But Melinda’s smart. She finds a way to indulge her interest in the estate and fulfill her obligations. She will uncover the truth behind the aging edifice for an epic article in the school newspaper.

But when her investigation reveals a connection between Connor and a tragedy long-since forgotten, Melinda has a choice: put off her junior year achievements to save a local landmark and a boy who constantly pushes her away or put them both out of her mind for good and focus on making the grade.

This is such a cool book, when I saw that it was actually book 2 of a series, I went back and grabbed the first one called My Senior Year of Awesome.  I really liked the first one and this one is pretty awesome too.

So here we have Connor and Melinda and those 2 are really fun together they don’t start off really well and Connor has a lot of secrets but those 2 have sparks flying all over the place.  I don’t want to give too much away but we have a mystery related to an old house to top it all off.

Honestly, it was a lovely book with a good steady pace and I did love the characters quite a lot. Melinda has a small role in My Senior Year of Awesome and it was really cool for her to get her own story.  Both characters were really well written and I could totally picture them in my mind. I loved the fact that it was not too cheesy sometimes to HS romances are and they were not stereotypical for sure.

I mean yes we had the staples in terms of jocks and drunken parties but it was really refreshing that it was not all that. Actually, it was quite serious considering one topic was raised there.

So all in all, I am going to give this baby my 2 thumbs up and recommend it, actually booth books. Though you can very much read them as standalone, I enjoyed and preferred having read book 1.  I am picky and fanciful this way.

So there you have it guys, this book was sweet and surprising, I am sure you will enjoy it!

Like most school days, only the specks of dust stirring in the air welcome me home.

After dropping my backpack in my bedroom, I haul myself back down to the fridge in search of a snack. I examine a container of funky-smelling take-out leftovers, toss the contents in the garbage, and grab an apple. From the beverage shelf, I grab a Perrier. Then I laugh at myself for drinking something as pretentious as Perrier.

I take my first sip of fizzy water, ready to enjoy five minutes of zoning out, when the floor shakes beneath my bare feet. Something crashes in the backyard. I glance out the window and spot a fallen oak tree. Setting down my drink, I move into the sunroom for a better view. Jack appears, lugging a four-foot-long branch across the yard. He pauses just beyond the terrace, releases his grip on the giant piece of lumber, and rests his hands on his knees. I slide my feet in my moccasins and push through the back door just as Connor bursts out of the woods, pulling a hooded sweatshirt down over his head. He tramples through the grass with his heavy boots, reaching Jack ten steps ahead of me.

Jack spits out a rough chain of curses. For an instant I believe he’s truly angry, but then they laugh together. They drag the heavy slice of tree over to the driveway and drop it next to Jack’s beat-up truck. Jack grabs a handsaw from the back and Connor helps him steady the branch.

“Can I do anything to help?” I approach slowly.

“Stay back, Melinda.” Jack pauses with his handsaw poised to cut. “Watch for flying wood chips. We’re taking down the dead trees and chopping firewood for the winter.”

Connor does a double take. “Look who it is. This is your house?”

“My stepfather’s. Do you two work together?”

“He just shows up and demands payment,” Jack grumbles. “How was your first day of school?” He drags the teeth of the saw back and forth over the wood until it snaps in two.

“Busy.” I consider elaborating but decide Jack’s just being polite.

Connor hefts both halves of the split branch and tosses them on top of the pile of wood in the grass. “Melinda, huh?”

I scrunch up my face, letting him know I’m annoyed.

Jack winds twine around a group of smaller branches and hauls them into the bed of his truck. “Is the school surviving without me?” His warm eyes twinkle.

“Barely. There’s been talk about knocking the whole place down and building a new one. But that may take years,” I say.

Jack nods. “Probably after I’m long gone.” He walks back to the yard, followed by Connor, and they each retrieve more of the fallen limbs. Jack resumes sawing. Connor resumes bracing the wood as Jack shaves it down to size. Grunting and swearing ensues.

After a few minutes, I step away. “If you don’t need me, I was thinking of taking a walk. I could use some fresh air before I start my homework.”

Jack glances up at me. “Watch for poison ivy and ragweed along the trail. You’re not allergic, are you?”

“Where I come from, poison ivy doesn’t exist,” Connor answers with a smug smile.

I take off toward the woods.

Connor calls to me. “Say hello to your horse for me.”

I smile sweetly, recalling his jitters when he met Truffle. “Maybe we’ll see you around the woods later.”

“I’m working now.” Connor grabs a rake and starts corralling loose twigs. “And if you’re driving a brown stallion the size of a monster truck through the forest, I’m staying far away from the trail.”

Jack glares at both of us. “Play nice, children.”

I leave them growling at each other. Thanks to Jack, Connor now knows my real name and where I live. I make a mental note to activate the security system whenever I’m home alone.

Jennifer DiGiovanni is the author of the School Dayz Series. When she’s not writing or reading, she likes to try new sports and activities from archery to ballroom dancing, with varying degrees of success.