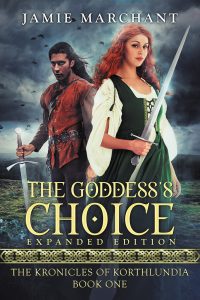 In a world where the corrupt church hides the truth about magic, the fate of the joined kingdom falls on the shoulders of two young people from opposite ends of the social hierarchy.

Crown Princess Samantha’s life begins to fall apart when she starts seeing strange colors around her potential suitors. She fears that she’s going insane– or worse that she’s defying the Goddess’s will. Robrek is a lowly farmboy with incredible magical powers. He has been biding his time waiting to get revenge on those who call him a demon.

Thrown together by chance, they must overcome their differences to fight their common enemy Duke Argblutal, who, with dark magic, is slowly poisoning the king’s mind and turning him against his own daughter. Time is running out for those chosen by the Goddess to prevent the power mad duke from usurping the throne and plunging the joined kingdoms into civil war.

Someone is wanting to give G.R.R Martin a run for his money I am telling you!

No dragons are involved in the story here, but I am talking more about the overall style and detailed writing.  Though, we dod not have really specific time markers and I hope i am not mistaken, this book takes place over an about 2 year period where we meet Robbie and Samantha as they are both going through their life together and separately all the way until they come finally really together in the end.

Though the book has an element of roman, it is really not the dominant theme here and here we are mostly dealing with political intrigue and on Samantha’s end and Robbie’s being different in a small community and pretty much everyone thinking him a demon.  Just an FYI Robbie has healing abilities with animals and can also communicate with them which is totally cool.

Another element that I really liked here, is the fast that the deity is a Goddess and I can only openly admit that it made me happy.

The book was nicely written and the characters good or evil ones were fantastic, however it was quite long and detailed thus me mentioning Mr. Martin.  Luckily for me the action hungry one that I am we get a few parts of danger and/or ass kicking along the way or this would have been really agony for me.

There are parts of me that wishes that we could have moved on with the storyline a lot faster and that it was a bit dragging on in place, but I do believe this is more related to my love of action and always needing to know what happens next than anything truly bad to do with the book.

It is slow but evenly paced and like I said, I managed to get some good bits along the way and some good surprises too.

Since this is book 1, I would be very curious to see what happens in the next chapter as the book finished here quite properly without any major cliffhanger (Thank the Goddess!!!) and honestly I am really looking to what happens next in Robbie and Samantha’s life.

If you like grand epic adventures, I think this will be the book for you!  And you know what even if it is not your cup of tea, there is a lot here in The Goddess’s Choice that is really amazing and I think Jamie did a wonderful job.

I am going to very highly recommend the book and I hope you enjoy it as much as I did!

Since the lady didn’t care, Robbie didn’t feel the slightest bit embarrassed that he couldn’t dance. She whirled away from him, and he swung her into his arms. She laughed, and he wished the night could last forever, but far too soon the lady stumbled and caught hold of his arm. “Should we sit one out, Milady?”

Breathing heavily, the lady nodded. “I guess I’m more tired than I thought.”

As Robbie led her back to her retainers, he noticed the grim looks on their faces. The scarred man had joined the two younger ones who’d been following them around. Scarface bowed to the lady. “Milady, we have a long ride back. We truly must leave.”

It was the best day of my life! Please don’t leave! Please say you’ll come again! “Yes, Milady. It was fun.”

“I truly wish I could stay longer, but we do have a long ride, and it isn’t fair to keep my men longer,” she said. Robbie cursed her men into the seven hells. The lady, however, let go of his hand. She kissed him on the cheek, caressing his face with her soft lips. “Goodbye, Robbie.

Remember me,” she said, then followed the scarred man off into the darkness.

How could she think he’d ever forget her? Robbie touched his cheek, feeling as if he’d just lost the most precious thing in the world. He hurried away from the dance floor before anyone could see him crying. He wiped his eyes as he threaded his way through the now deserted stalls toward Wild Thing. 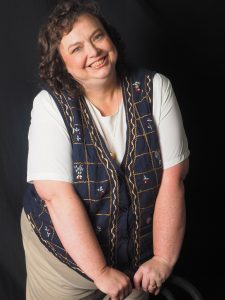 Jamie began writing stories about the man from Mars when she was six, and she never remembers wanting to be anything other than a writer. Everyone told her she needed a back up plan, so she pursued a Ph.D. in American literature, which she received in 1998. She started teaching writing and literature at Auburn University. One day in the midst of writing a piece of literary criticism, she realized she’d put her true passion on the backburner and neglected her muse.

The literary article went into the trash, and she began the book that was to become The Goddess’s Choice. She is now releasing an expanded edition of the novel. Her other novels include The Soul Stone and The Ghost in Exile. In addition, she has published a novella, Demons in the Big Easy, and a collection of short stories, Blood Cursed and Other Tales of the Fantastic. Her short fiction has also appeared in the anthologies– Urban Fantasy and Of Dragons & Magic: Tales of the Lost Worlds—and in Bards & Sages, The World of Myth, A Writer’s Haven, and Short-story.me. She claims she writes about the fantastic . . . and the tortured soul. Her poor characters have hard lives.

She lives in Auburn, Alabama, with her husband and four cats, which (or so she’s been told) officially makes her a cat lady. She still teaches writing and literature at Auburn University. She is the mother of a grown son.

and it will be .99 on release day only.
a Rafflecopter giveaway