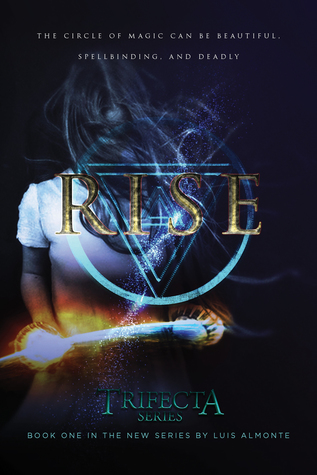 Rise (Trifecta, #1)
by Luis Almonte
Publication date: August 27th 2016
Genres: Paranormal, Young AdultThe South Haven Academy for the Gifted and Talented (SHAGT) not only houses the exceptionally intelligent, but unknown to the normal students, a number of “gifted and talented” witches attend class with them every day.Among the student body is fifteen-year-old Alexia Wick, a witch of the white-magic-practicing Alerium coven. Like the regular students, Alexia feels the pressure to succeed and meet her parents’ expectations, albeit with slightly different conditions. Rather than fretting about finals or college placement tests, she is in an entirely different arena—that of the Annual Trials.

In this prestigious competition among the most powerful witches in the country, Alexia must prove her magic and spell-casting abilities in order to advance in her skillset and bring triumph to Alerium. Her focus is distracted when the handsome and confident Kaleb moves to town.

Preparing for battle, falling in love—yes, Alexia is just like the other students at SHAGT. But with betrayal and death on the line, do the stakes of the competition and a romance shadowed by a dark, life-threatening secret even compare to those of a normal teenager?

I am so late on reviewing Rise, I finished it a while ago but work was so busy that I did not have the chance to actually sit down and write it down.

I really liked the story, it seems like recently I have had a lot of books to read abound witchcraft and that makes for a nice change from my usual angels and whatnot.

Rise centers around Alexia and her family as the core of the story and expands more and more as the story moves along. We discover that we live in a world where actually witches do exist and live amongst us, though we do not know about them. They have factions and very strict rules so that they are protecting themselves and us in one go.

Alexia is a teenage witch and has a brother and sister. they are training for the trials and well things get a little disrupted when she meets Kaleb!

A lot of the book is about the setting of the characters and the story and introducing us to an alternative world that is and isn’t so different to ours.

Witches or not, well they seem to have the same problems we do, well…. for the most part!

I did finish the book in one go and I found it really well written, and an easy read. It took me a couple of chapters to get into it but I admit the reason that happened is because I was so tired after a never-ending day of work that I could not focus! Does it happen to you as well?

Well back to the book and the characters, and I think Luis did a really good job with the characters as an ensemble. They were cohesive and individual at the same time, and I really enjoyed some of the twists thrown in there at the right time.

This is really a great introductory book to a series, and based on what I have seen we are being setup for what is coming next. I am expecting the following books to have a lot more packed into them especially following some of the events that happened in the second part of Rise.

Something is going on, I am not sure what it is exactly, but I can tell you that I am really looking forward to those events.

I am not sure when book 2 is meant to be released, but I hope it will be soon and that we will not have a long time to wait for it.

In the meantime, I am going to recommend Rise to you and I hope you enjoy it as much as I did!