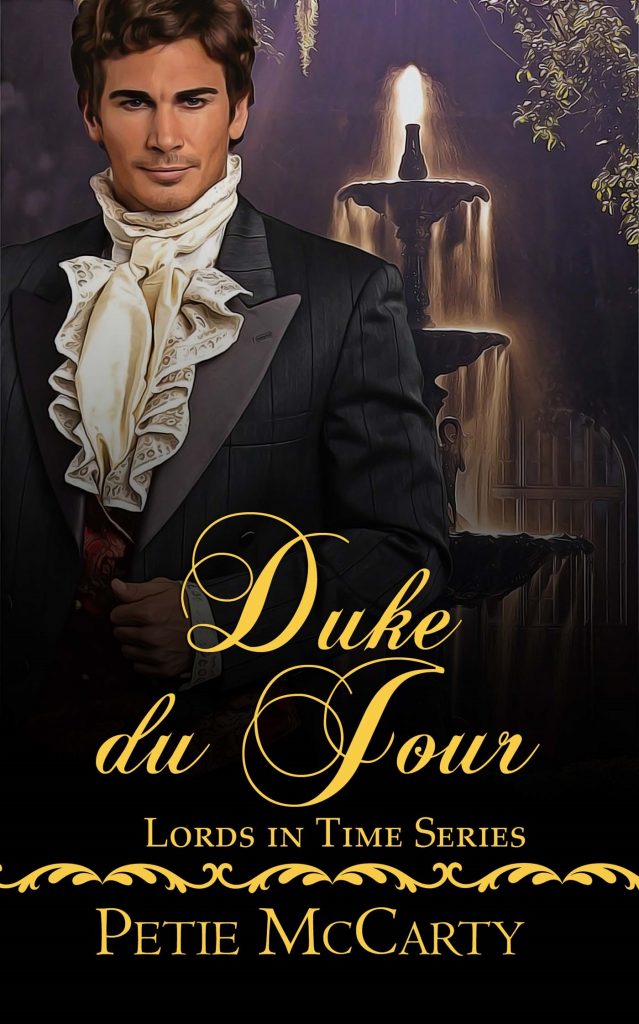 ..a reverse Kate and Leopold…a light-hearted time travel romance where a bewildered modern-day duke ends up in Regency England and meets the girl of his dreams…

Jared Langley, present-day Duke of Reston, tumbles into an abandoned fountain on his ducal estate and travels back in time to the year 1816. There, Reston servants and local villagers think him a dead ringer for his namesake and rakehell ancestor–the seventh Duke of Reston, gone missing at the Battle of Waterloo. Unfortunately, Seven got mixed up with French spies out to assassinate the Duke of Wellington, and an unwary Jared ends up in their crosshairs.

Lady Ariana Hart has loved Jared Langley, the seventh Duke of Reston, since she was twelve years old, until the night the rogue broke her heart. Given up for dead, her rakish neighbor makes a miraculous return from Waterloo–only Jared shows up a changed man and reignites all the feelings Ariana had long ago buried.

Jared is in a race against time. He must waylay the suspicions of his quirky servants and neighbors, get to Wellington before the French spies do, fix his fountain–before Seven shows up–so Jared has a way home, and definitely not fall in love with the irresistible Lady Ariana.

Duke du Jour was actually really good and very much entertaining!  You know, over the years, I thought many times how I would react if I went back in time, but as a woman, I knew that it would pretty much suck since well… we were considered barely human in the old days.

But here, we have a guy who went back to the Regency era by mistake, just cause he fell in a fountain.  I mean in Outlander, Claire had to touch that stone! So water, I can live with very much so!

Well, our hero is Jared, and at the beginning of the book, things are not going well for him because his fiancee is pretty much caught cheating! It all went downhill from there…

Ok mini spoiler alert, we landed in pretty much a spy novel, because as soon as Jared landed (ok arrived) in the 1800’s well attempts are being made on his life!

Let us not forget Lady Ari coming into the mix and well poor Jared falling for her hard!

Alright, I have given you way too many details…

So back to business, and me telling you that I really enjoyed Duke du Jour!  It was witty, sweet, oddly enough quite realistic in terms of reactions to being in the wrong century (there is a language barrier) and really overall super charming.

I had a huge smile on my face pretty much throughout the book and I was really sad when I finished!

Both Jared and Ari are very lively characters that I rooted for from the get-go, and I have to give props to Bullen and Dex for also being outstanding supporting characters.  I have to tell you that I have a soft spot for both of them, and I would not say no to each having their own book!!

Especially Dex! he is a cheeky minx!

Now that I think, would be a riot…

So just to recap, Duke du Jour was fabulous, and I am going to be very highly recommending it and I need to dig in Petie’s other books because she is a gifted story teller! 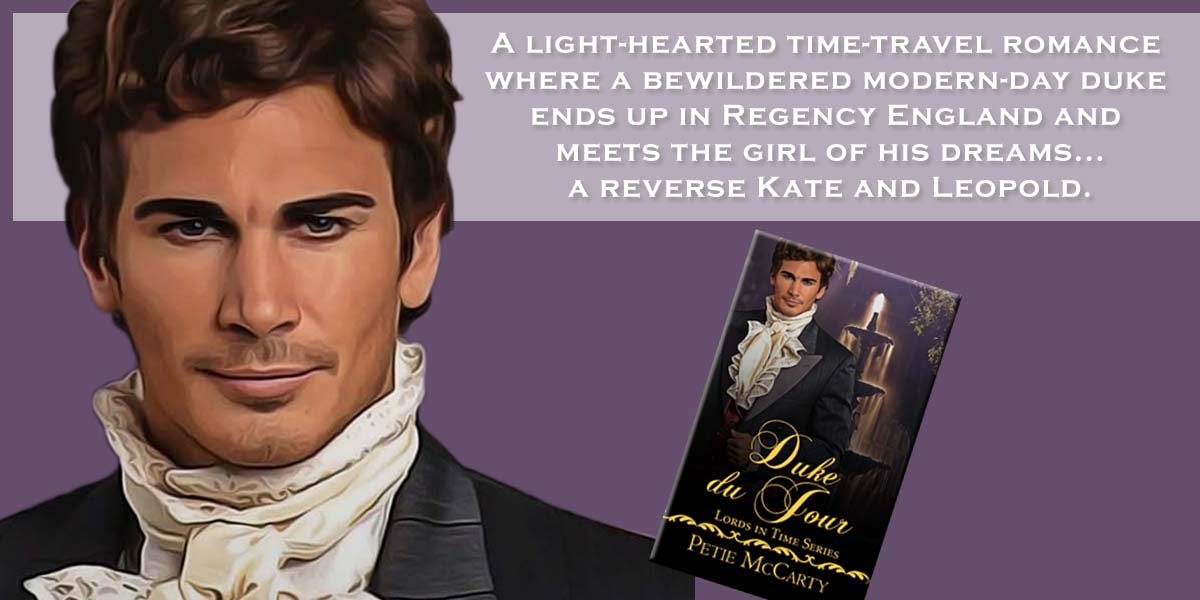 Jared quietly closed the door and snicked the feeble lock into place.

“That wouldn’t keep a child out,” he muttered.

“Are you worried Dexter can get past the lock?” Ari asked, her cheeks flushing bright pink.

“Now, you are going to accuse me of ungentlemanly behavior, too?”

Even the dim candlelight could not hide the guilt in her eyes. “I am sorry. I shouldn’t have said that.”

“You’re right. I have given you no reason to think—”

“Well, except for those few kisses.” He cleared his throat. “You liked them, too. You cannot deny it.”

Her lips twitched as she fought back the smile that angered him for some reason, and he felt like an errant schoolboy and probably looked like one with his brows indignantly bunched.

Instead of feeling smug at being right, her words sent his blood racing to places off-limits—at least for now.

“But that doesn’t mean—”

He held up a hand. “Please, no more swipes at my character. I’ve had all I can take this evening.”

She snapped her lips together, then grinned.

“Best take your boots off to be comfortable.” She opened her mouth to object again, and he added, “Since you are unlikely to remove anything else with the two of us locked in here.”

The opportunity to tease him in his misery must have overwhelmed her. “Well, actually I could, but I won’t.”

He groaned. “Do not leave me with that particular movie running in my head and my two-hour first watch to face.”

“Did I say movie? I meant movement,” he said before she could finish. He scrubbed a palm over his face. His head had begun to ache.

“Are you all right?”

“Leave you alone? Fine.” She went over and sat on the bed.

“What I was going to say was just leave your boots by the bed. Close by in case we need to leave in a hurry.”

“That is a lie, but it was sweet of you to be concerned about my feelings. The old Jared wouldn’t have given a baker’s tart about them. Or any other kind.” She giggled at her own humor.

“Oh nothing. Just that we seem to have made a mull of things, I suppose.”

“I do not see anything funny about it,” he grumbled.

“You wouldn’t, but I cannot get these boots off without help. They belong to Aidan, our stable boy, and the fit is a bit too tight.”

Jared came over and knelt next to the bed, then took her booted foot in his hand. He swore he could feel the warmth of her leg right through the leather, but that was impossible. Tell that to the blood raging through his veins and heading south, like the River Kennet at flood stage. 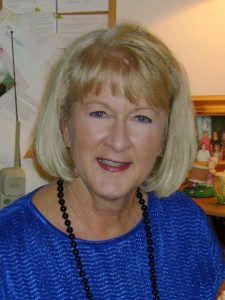 Petie spent a large part of her career working at Walt Disney World — “The Most Magical Place on Earth” — where she enjoyed working in the land of fairy tales by day and creating her own romantic fairy tales by night, including her new series, The Cinderella Romances. She eventually said good-bye to her “day” job to write her stories full-time. These days Petie spends her time writing sequels to her regency time-travel series, Lords in Time, and her cozy-mystery-with-elements-of-romantic-suspense series, the Mystery Angel Romances.

Petie shares her home on the Cumberland Plateau in Tennessee with her horticulturist husband, a spoiled-rotten English Springer spaniel addicted to pimento-stuffed green olives, and a noisy Nanday conure named Sassy who made a cameo appearance in Angel to the Rescue.