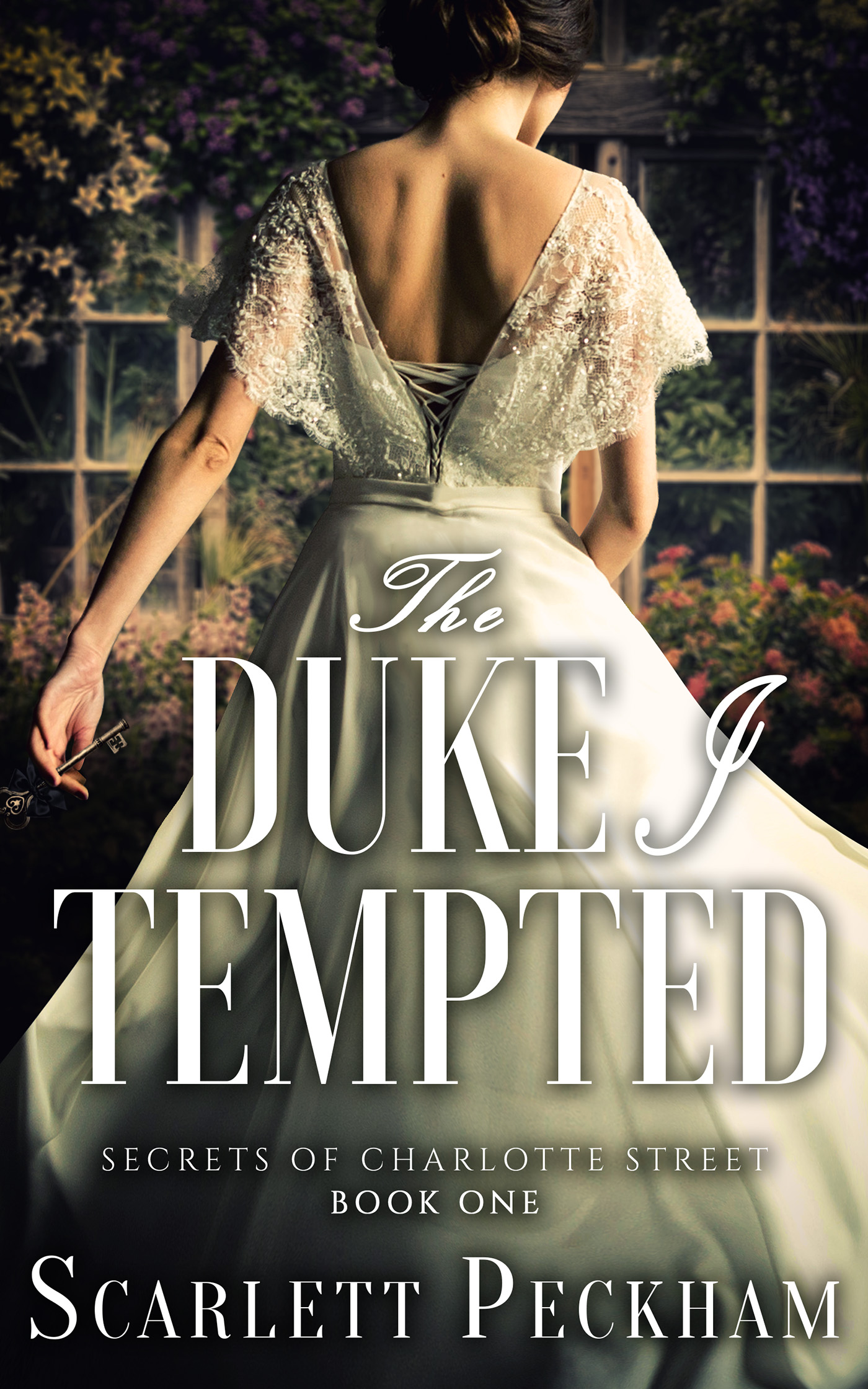 The Duke I Tempted
by Scarlett Peckham

Having overcome financial ruin and redeemed his family name to become the most legendary investor in London, the Duke of Westmead needs to secure his holdings by producing an heir. Which means he must find a wife who won’t discover his secret craving to spend his nights on his knees—or make demands on his long scarred-over heart.

Poppy Cavendish is not that type of woman. An ambitious self-taught botanist designing the garden ballroom in which Westmead plans to woo a bride, Poppy has struggled against convention all her life to secure her hard-won independence. She wants the capital to expand her exotic nursery business—not a husband.

But there is something so compelling about Westmead, with his starchy bearing and impossibly kind eyes—that when an accidental scandal makes marriage to the duke the only means to save her nursery, Poppy worries she wants more than the title he is offering. The arrangement is meant to be just business. A greenhouse for an heir. But Poppy yearns to unravel her husband’s secrets—and to tempt the duke to risk his heart.

Order this title at these online retailers:

I am going to tell you this straight!

The Duke I Tempted was ready a great read. Actually, I finished it the same day I got it and I did not put it down until I was done.

In recent months, I have been enjoying those Regency romances with a twist. You know all the ones that included some mysteries or spies etc… I think those elevated the genre quite a bit and here we have something with a more classic take, but still with a spice.

Now, you have the blurb above and from there you can guess what the spice is, but even then though it is part of the background of the story and integral part of Archer, our dashing duke!

Poppy, is also something else.  A real breath of fresh air and a business woman to top it all off.  In those books, you always get the women to be governesses or modistes etc.. but Poppy is a gardener and a very talented one at that.

So Scarlett you get 2 thumbs up from me for sheer originality.

It was really entertaining seeing these 2 come together, I have to give extra brownie points for Archer’s sister!  That is another really standout character and I loved her very much!

You know me, I love strong female characters.

I am not going to discuss Archer’s personal proclivities here, because though an important part of who he is, it is not all of him.

I hope you understand what I mean.

But I will be nice and tell you, that is not a reverse 50 shades in regency.  I found that the way the topic is addressed, quite smart and refreshing!

For me, it was about acceptance.

I am curious to see what you guys think after you read it, because you already know that I am going to be very highly recommending it.

The Duke I Tempted is a true original standout, and I cannot wait to read more from this series, as this looks like to be book 1.

Saying that, I am not entirely sure, if book 2 will focus on a new set of people or maybe around someone we already met here, but either way, I am looking forward to it.

Poppy sat at a round table in the corner, surrounded by piles of drawings. She still wore her gardening clothes, and her eyes were heavy lidded. She looked intense and flushed and disheveled.

No. He must stop doing that. Must chasten his reactions to her.

Hardworking. She looked tired from her labors.

She looked up at him with a guilty expression. “Your Grace. Yes. And it seems I have invaded your study — I’m so sorry. The others were playing whist in the library and I thought to finish my work in the quiet. I’m just finishing — I’ll leave you.”

“Never mind. Stay. Please. Show me what it is you’re sketching.”

She hesitated. He felt her eyes linger on his face, like she was trying to discern something about him. No doubt, her downcast expression had something to do with his invasion of her bedchamber the previous evening. He needed to address that. No woman who’d been raised in Grove Vale would be ignorant of the stories about his father. He could not have her think that he expected similar liberties of her. He had taken far too many as it was.

“Poppy, last night — I hope I didn’t alarm you. I apologize for intruding. I would not normally disturb a lady’s privacy, and I hope I gave no offense. I was concerned. You seemed quite distressed.”

Her face flickered. “It was only a nightmare,” she said finally. “I shan’t disturb you again.”

“I was not disturbed,” he said quickly.

She smiled. “When I awoke this morning I wondered if I had dreamt you.”

“No,” he said, drinking in her languid eyes.

She reached up and touched his face above his cheekbone. “No,” she agreed. “Here you are. Real indeed.”

Damn him, but he caught her hand and dragged it down to his lips and placed a kiss inside her palm.

Her mouth parted. Perhaps in shock. Perhaps in something closer to the feeling surging behind his sternum, overriding his judgment, his propriety, his will to be the kind of person he had spent a decade refashioning himself into.

“Forgive me. I am not myself tonight,” he forced himself to say, releasing her. He looked into her green eyes and told her the truth of it: “You should leave me.”

He hoped she wouldn’t listen.

Scarlett Peckham fell in love with romance novels as a child, sneaking paperbacks from the stash in her grandmother’s closet. By the time she came of age she had exhausted her library’s supply and begun to dream of writing one of her own.

Scarlett studied English at Columbia University and built a career in communications, but in her free hours always returned to her earliest obsession: those delicious, big-hearted books you devour in the dark and can never bear to put down. Her steamy historical romances about alpha heroines have been finalists for the Golden Heart® Award four times. Her debut book, THE DUKE I TEMPTED, will be out July 31, 2018.

Scarlett splits her time between London and Los Angeles. When not reading or writing romance she enjoys pretending to know about wine, discussing The Real Housewives, and cooking enormous pots of soup.

Scarlett is represented by Sarah Younger at the Nancy Yost Literary Agency, and spends far too much time on Instagram and Twitter.