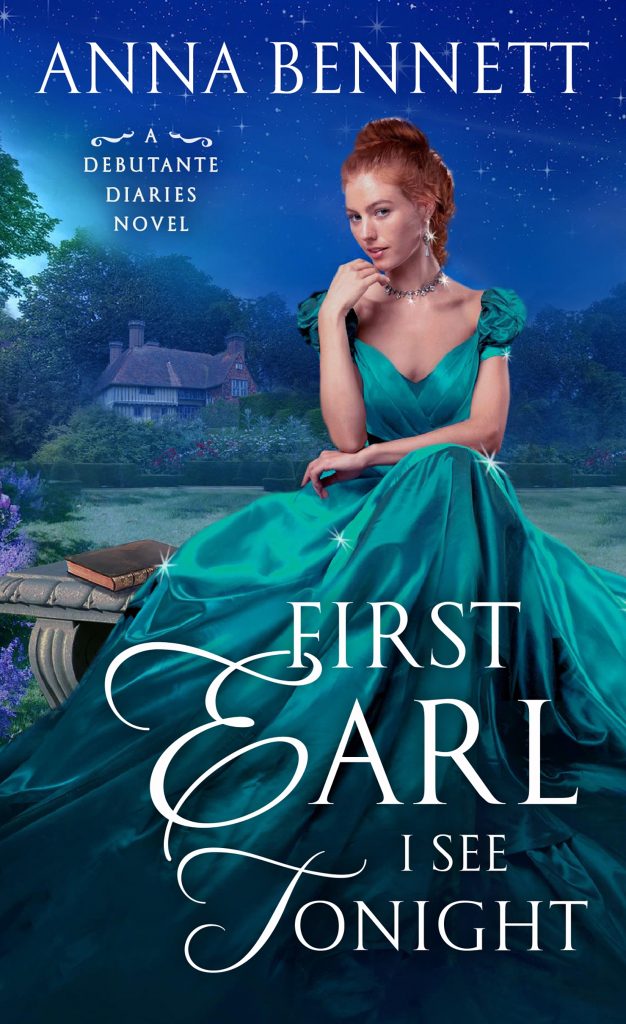 An heiress with a daring proposal. An earl who’s determined to resist her. And a love that just might be written in the stars, in First Earl I See Tonight by Anna Bennett.

Recently jilted by his fiancée, David Gray, Earl of Ravenport is not in the market for a wife. Even if Gray didn’t have his hands full renovating his crumbling country house, it would take more than a bold marriage proposal from a headstrong young beauty to thaw his frozen heart. Gray is confident that spending a week at his ramshackle estate will change her mind about marriage, but every passionate moment he spends with her tempts him to change his…

A talented artist, Miss Fiona Hartley desperately needs her dowry money to pay off a blackmailer set on ruining her sister. The handsome earl seems a sensible choice for a husband…if only she can convince him that romance will play no part. But marrying in name only may prove difficult for Fiona.

Gray can’t help but be dazzled by her genuine warmth. Yet as their feelings deepen, Fiona’s deadline looms. Will her secrets destroy them, or is true love their final destiny?

I have had the chance to read and review some of her books, and they are always entertaining.  If you are interested, I have reviews for the 3 Books of the Wayward Debutantes Series.

These books were great fun and do highly recommend them.

So it came to no surprise that First Earl I See Tonight was as equally entertaining and a fantastic read!

It is not every day that a lady goes on chasing after an Earl to marry her, but that is the oversimplified version of what is happening here. That is as many spoilers as I am willing to give you.

Fiona was honestly a fantastic character, very unusual lady of her time. That makes her really stand out for me as what she is doing is not for herself but for someone she loves.  Who can resist a self-sacrificing heroine?

David on the other side is equally outstanding, and frankly putting these two together was really fun and electric at the same time.

I am pleased to say that I really enjoyed this tangent from the usual trope and it did make this book stand out for me.

First Earl I See Tonight was a great easy read, I only put it down when I was done with it. Honestly, I would have not complained about a few extra chapters.  Anna is an amazing writer and never disappoints.

For this reason, I am going to very much recommend First Earl I See Tonight to you all and I hope that you will love it as much as I did. 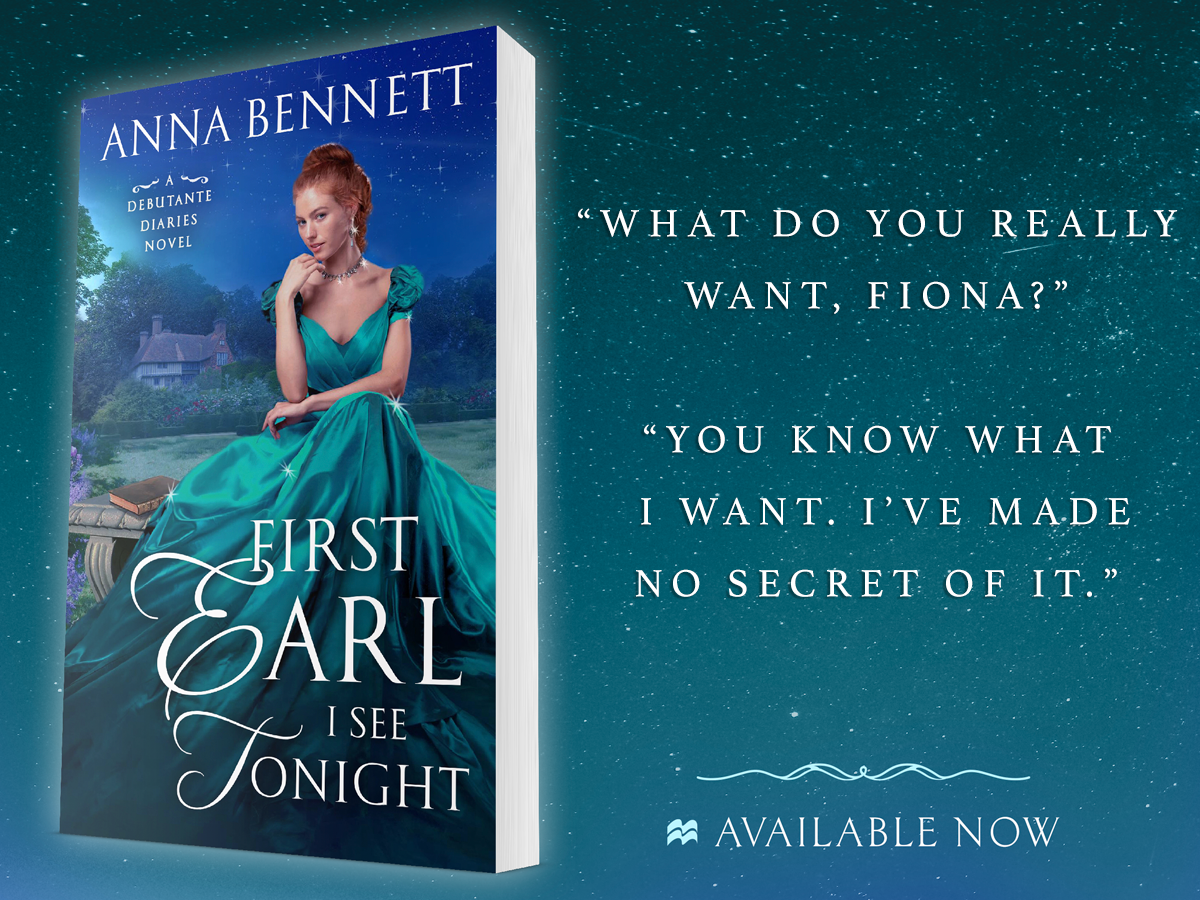 “Lord Ravenport,” Lady Callahan intoned, closing her fan with an expert flick of the wrist. “Please, allow me to present my daughter Miss Sophie Kendall and her friends Miss Fiona Hartley and Miss Lily Hartley.”

Gray exchanged the expected pleasantries, then turned to Fiona. A halo of loose curls crowned her head, and she worried her plump bottom lip. Her pink gown exposed the long column of her neck and the curve of her shoulders; he could almost see her pulse beating wildly at the base of her throat.

His instincts screamed for him to run right out of the ballroom, and yet his boots remained rooted to the floor. Worse, before he knew what he was doing he’d asked her to dance.

“It would be my pleasure,” she stammered, taking his arm.

As he led her to the dance floor he questioned his own good judgment—and not for the first time that day. He’d witnessed Miss Hartley trip and tumble into the orchestra at the Millbrook ball. He’d been dancing with Helena at the time but had paused to help her up.

So much had changed since then.

falling, but just to be safe he tightened his hand on her waist. And they began moving to the music.

The first measure had barely played before she asked, “You received my letter?”

“I did,” he said noncommittally, twirling her beneath his raised arm.

When she faced him again, she looked him directly in the eye. “What do you think of my . . . offer?” she asked, her voice cracking on the final word.

He tamped down an unexpected pang of sympathy. “I think that we hardly know each other.”

“True, but that is easily rectified, is it not?” There it was—an unmistakable hint of desperation. And a sense of urgency that even her letter hadn’t conveyed.

“It is,” he conceded. “However, I suspect that the more we know each other, the less we’ll like each other.” Cynical but true in his experience. His parents certainly hadn’t grown fonder of each other. Neither had he and Helena.

She winced and looked away before regaining her composure. “Perhaps. But we needn’t like each other.”

Gray chuckled at that. “I never thought I’d meet some­ one more jaded than I.”

“So, you’ll consider my offer?” she pressed.

“I will not,” he said firmly. Under different circum­ stances, her fortune may have tempted him. But she was clearly intent on using him for her own purpose—and he suspected that she’d set her sights on him for reasons be­ yond his title. After all, there were half a dozen peers in attendance right now who’d leap at the chance to marry a young and unconventionally beautiful heiress.

But he was not one of them.

“It seems rather closed­minded of you to dismiss me summarily,” she shot back, displaying a boldness that was borderline rude—and refreshing.

“If I said I’d consider your offer, I’d only be giving you false hope. Delaying the inevitable.”

“The inevitable rejection, you mean,” she clarified. “Yes.” He was still reeling from the sting of Helena’s

rebuff and wouldn’t wish anyone that sort of pain and humiliation.

“Please,” she begged. “I realize that it’s highly unusual for a woman to propose marriage—”

“Surely you must be curious—as to why I did it.” She looked up at him, her shining blue eyes challenging him to deny the truth of her words.

Gray shrugged. “You have your reasons for making the offer; I have my reasons for declining it.”

“Give me the opportunity to explain,” she pleaded. “Just a quarter of an hour to make my case. If, after that, you remain unconvinced, I promise I shan’t mention it again.” He must be out of his damned mind to consider engag­ ing in further discussion with Miss Hartley. The very last thing he needed was another conniving, self­serving fe­ male attempting to interfere with his life. He had opened his mouth to tell her so when someone bumped into his

Gray’s torso collided with Miss Hartley’s chest, and she stumbled two steps before he wrapped an arm around her slender waist, catching her just before she landed on the parquet floor. She gasped and clung to his jacket, her ex­ pression an odd mix of relief and mortification.

Their faces were so close he could see unexpected dark blue flecks in her irises and the individual freckles dotting her nose. “Forgive me,” he said.

For what indeed? Steering her into the collision? Grip­

ping her waist too tightly? Or for staring at the swells of her breasts and having decidedly wicked thoughts while he should have been shielding her from further embar­ rassment? Ignoring her question, he asked, “Are you all right?”

“I am.” Her cheeks turned a charming shade of pink. She blew out a breath and shot him a shaky smile. “When it comes to dance floor mishaps, I confess I’ve survived much worse.”

Gray looked over his shoulder to see how the other couple fared, surprised to find Helena and her dance part­ ner smiling apologetically.

And the truth struck him. For the last ten minutes, while he’d been dancing with Miss Hartley, he’d been completely, blissfully unaware of Helena and what she was doing. Even more remarkable, he’d forgotten that she was in the room. “Meet me in Hyde Park tomorrow,” he said to Miss Hartley, mentally cursing his own weakness. “I will listen to what you have to say, but don’t expect anything to

The corners of her mouth curled in a triumphant smile. “Thank you. All I ask is that you allow me the chance to explain the advantages of the arrangement—for us both.” “Forgive me if I remain skeptical,” he drawled. “I’ll

meet you near the footbridge. Three o’clock?”

“You won’t regret this,” she said earnestly, but the prick­ ling sensation between his shoulder blades suggested he would. In spite of her naïveté and candor—or maybe because of those things—Miss Hartley could prove far more dangerous to him than Helena had ever been. 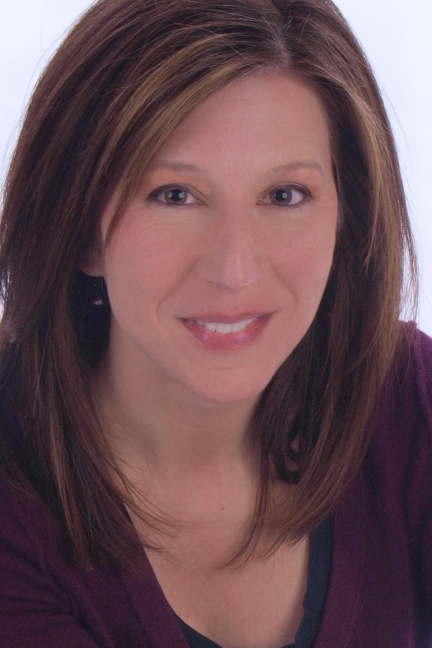 ABOUT THE AUTHOR:
Anna Bennett started swiping romances from her mom’s bookshelf as a teenager and decided that books with balls, dukes, and gowns were the best. So, when she had the chance to spend a semester in London she packed her bags—and promptly fell in love with the city, its history, and its pubs. She dreamed of writing romance, but somehow ended up a software analyst instead.

Fortunately, a few years and a few careers later, Anna found her way back to writing the stories she loves and won the Romance Writers of America’s Golden Heart®. She lives in Maryland with her husband and three children, who try valiantly not to roll their eyes whenever she quotes Jane Austen.

Anna’s books include of the Wayward Wallflowers series and the Debutante Diaries series.